The Mildew from Planet Xonader – A Guest Review

In today’s BMBR guest review we welcome Mikey (Specter) From the Bad Movies Reddit page to fry our brains and serve it back to us, with a dissection of  the Necrostorm mind-fuck ‘The mildew from planet xonader’.

You know what makes for a great first post on a site dedicated to shitty movies? A not-so-shitty movie, obviously. Following that train of thought, what type of film would you use to launch a shared universe and build up a backstory to a video game based in said universe? Why, a movie that already existed with no ties to the property you’re advertising, of course! You’re probably confused, let me explain. 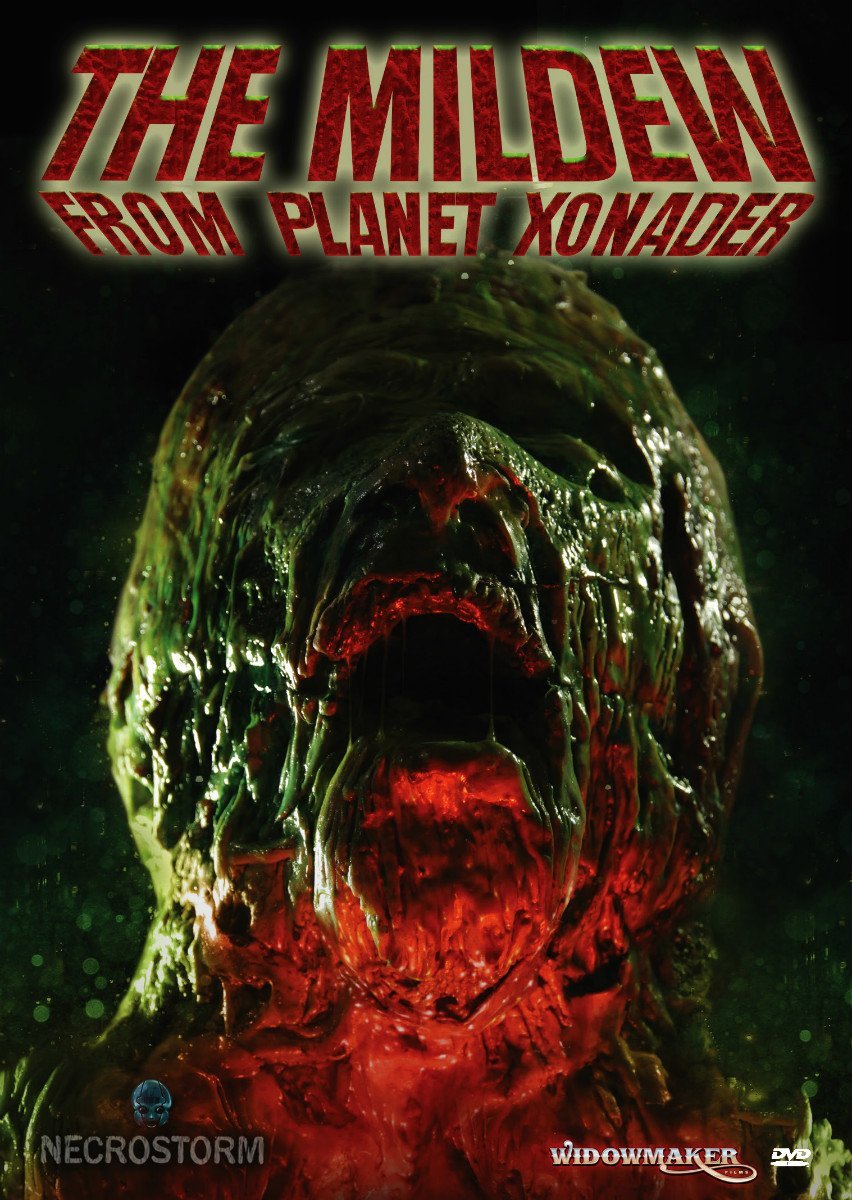 Mildew is a 2016 action/splatter/scifi film produced by Necrostorm. It tells the story of an up and coming space fungus just trying to find its place in this crazy world. Only thing stopping it is the Bentan Corporation, a weapons manufacturer that’s captured the celestial snot and plans on using its foliage eradicating powers to cripple their enemy’s food supply in the glorious name of Reagan.

But when it’s revealed that the scientists responsible for its production are being used as the first live tests of the mold’s effects on humans it’s an all out battle for survival against evil spores, super soldiers, zombies, and one potentially insane psychic traitor. 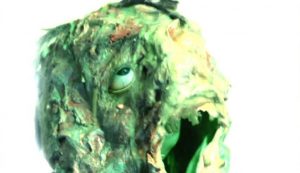 That’s a lot to take in, but if you hang in there for a few more minutes I’m gonna make it a shit ton more confusing, just for you. What we’ve seen is the A-plot of Mildew. The B-plot involves a Japanese rival to Bentan hiring a mercenary, dubbed Toxic by his malfunctioning Siri powered acid glove, to collect samples of the killer spores as well as one infected human.

Toxic fights in the background against entirely different threats while being filmed on an entirely different camera. Almost as if he’s not from this film. The plot thickens. Thickens like so much mildew. Let’s get into the fun stuff. 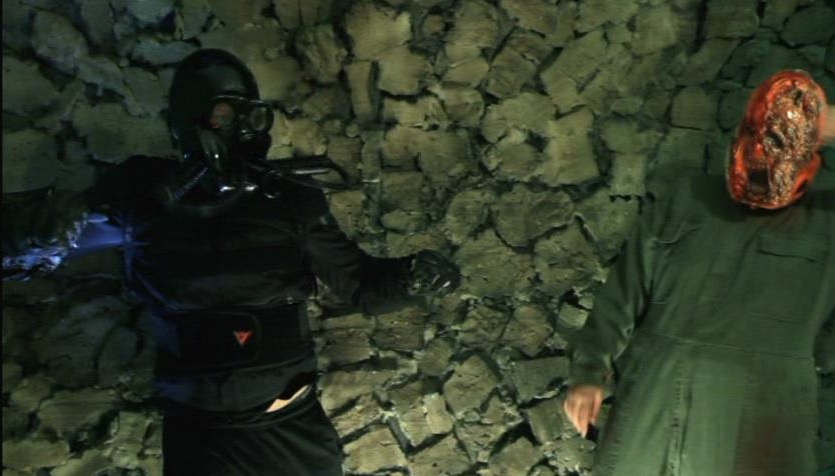 So, show of gross, battered wrist nubs where hands once sat, who’s familiar with Italian splatter juggernaut Necrostorm? Well, who knew about their video game, Death Cargo? Eh, yeah, that’s what I thought. You may not’ve heard it because it probably doesn’t exist. But that didn’t stop Necrostorm from selling it, then recalling it, then announcing a remake under the title Gorebreaker. That’s a story worth an article of its own, but how does Mildew fit into this nonsense?

Well, Mildew is considered by Necrostorm head honcho Giulio De Santi to be the jumping off point for for the Gorebreaker franchise, it exists to give us an origin story for the game’s Mildew subclass of characters; Leach, Toxic, and ScannerX. Pretty ingenious, it’s a great way to get people hyped for the game that may or may not ever see the light of day. 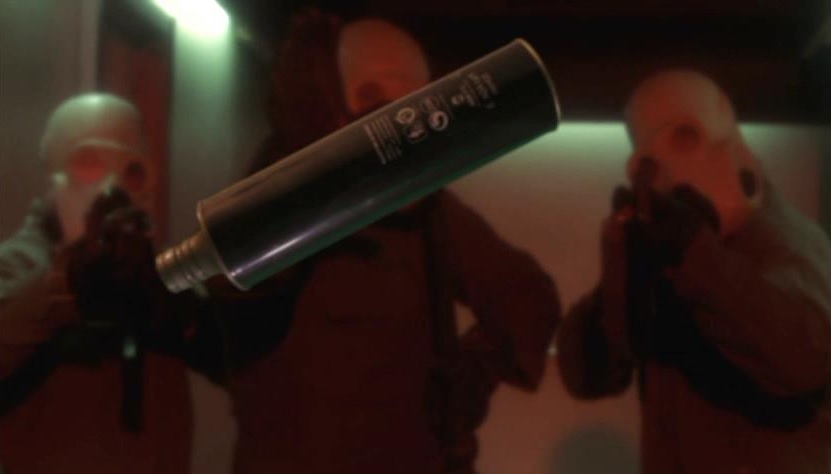 The odd part is, though, like I mentioned before this movie has fuck all to do with the Gorebreaker universe. In fact, some of you may’ve already seen this flick, or some approximation of it. It was releases a few years back as Mold! Neil Meschino’s B-grade spoof of old school creature features and melt movies told largely the same story with a little less gore and a lot less Toxic and company.

What happened was, for one reason or another, De Santi saw something he liked in Mold! and decided to team up with Meschino to work it into a new movie altogether. By his own math he used a fourth of what we saw on screen in Mold!, twenty five percent of the footage Meschino left on the cutting room floor, and filmed fifty percent of a movie about his own characters to round out the runtime. So even if you’ve seen Mold! – and unfortunately I haven’t, gonna have to fix that – there’s plenty of new stuff to justify checking out Mildew. 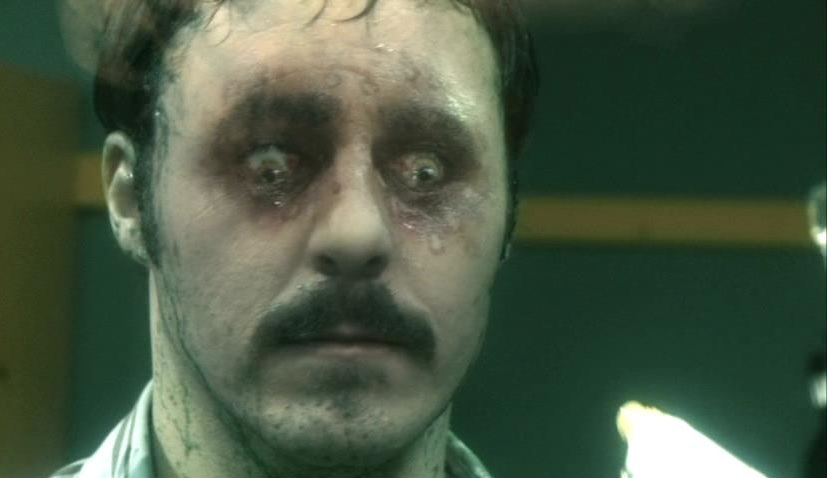 But how does it hold up as a movie? Surprisingly well, honestly. It’s bad, of course, in two distinct ways – the self aware, ironic style of Meschino’s original footage clashes immensely with the try-hard edginess of De Santi’s – but it’s insanely fun to sit through. While the comedy is stripped down from the original you’re still getting a fairly sharp script with lots of funny moments and characters from Mold!, and on the Mildew side of things we’ve got some incredible practical and digital effects, Necrostorm’s bread and butter.

The expertise with which the footage is stapled together puts Mildew head and shoulders above your usual Godfrey Ho hackjob. I was genuinely impressed by how well they managed to sneak the new footage in. It doesn’t always gel, especially when characters from both plots are attempting to awkwardly communicate across space and time, but the way De Santi and crew managed to work their footage around what they already had to make it plot relevant was impressive, even going so far as to plaster their own unique gore effects over the old footage without making it look out of place, which is mind boggling to me. 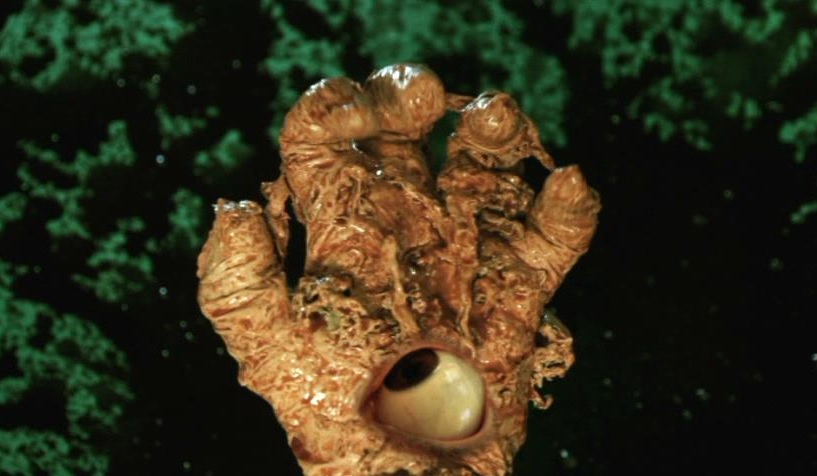 Of course, all this praise hinges on your stomach for a few particular subgenres of bad movies; intentional cheese, splatter, and Italian attitude. As amazing as Necrostorm is – their budget conscious production and stupidly slick visuals usually mask their films’ problems – their scripts tend to come with safety warnings so you don’t gash yourself on their edge, and Mildew is really no different. Toxic is a foul mouthed merc with no real character beyond his copious fucks, shits, and threats but I personally love that.

Same goes for Meschino’s humor; he’s making something intentionally dumb to poke fun at the accidentally silly movies he shares a genre with. When done right that’s genuinely my favorite kind of comedy, and I think it works here. The gore is excessive. Like, almost Ittenbauch or Schnaas levels of gooey, and if you’re the squeamish type then I apologize for putting this sentence about five paragraphs below the excessively graphic screen shots from the movie, I’m only human. But if you’re the kind of ironic gorefiend edgelord that eats this kind of thing up then I not only recommend you grab Mildew now but check out Necrostorm’s other stuff while you’re at it. You won’t be disappointed.

Availability: Mildew comes in two flavors, both of which seem pretty tasty to me. Widowmaker just put out their North American DVD and, unlike their previous releases for the company, it actually comes with some very minor special features which is nice. On the other hand, if you purchase the movie from Necrostorm’s site directly you’re getting the same movie, more features, and a bunch of feelies to fiddle with while you watch, namely a comic that further expands on slowly spreading cancer that is the Gorebreaker universe. I didn’t pick this version up due to uncertainty of the movie’s quality but if you liked what you saw here today I’d absolutely recommend grabbing this one.