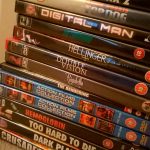 This film may be a little bit difficult to predict, seeing as the audio track for its trailer has been disabled on YouTube. This still doesn’t prevent it from featuring a man dressed in a gimp outfit for some reason.

Or as the trailer suggests…Shinanigans: The Movie! This looks genuinely shit, not in any entertaining way, but in a ‘has a half decent budget and an entirely forgettable story’ kind of way. I have no doubt whatsoever that I will remain one of the vast majority of human beings who have never seen Double Vision.

Assuming you can read, then you have just had a mild orgasm at the promise of a movie featuring Gary Daniels, Pam Grier, and Gary ‘Cocaine’ Busey. And sweet Jesus, does this movie look every bit as awesome as it’s casting choices…

Ahh, Umberto Lenzi. If you are unsure of who he is, then have a read of the Thunder Squad review to get a gist of the man. Personally, I’m not sure what to expect from Deep River Savages (properly known as ‘The Man From Deep River’), other than ham-fisted racism and gore. But we’ll see, as this is one is definitely for watching…

This pile of dog shit has three different names, depending on who you ask. There is the version I bought, called ‘Phoenix 2’ (there is no Phoenix 1). There is a version called ‘Droid Gunner’, and there is yet another version called ‘Cyberzone’. How or why I’ve no idea, but if I’m already getting a headache just trying to understand the films title, then I think we would be better off keeping a respectful distance.

So apparently the L.A Times called this film astonishing, which sounds a little misrepresentative, if not just outright bullshit. It’s hard to know but at least the trailer gives us a good idea about what the film is all about. Only kidding! No, instead it is the WORST trailer to ever waste 90 seconds of your life…

Er. What the shit did I just watch? Have a look at this trailer and see if you can spot when things go off the rails ever-so slightly.

Yes, I bought Top Dog staring Chuck Norris and a dog, and not for the first time I wonder why the hell I do this to myself? And yes, I probably will watch the damn thing.

Not to be confused with ‘Alien’ or ‘Species’, or anything half decent, Alien Species is a yet another baffling mystery to me, as the following trailer fails to provide anything relevant.

No, mine isn’t in French (I think), just that this was the only image of the cover I could find online. As for the film itself? It looks predictably woeful. Could be fun!

too hard to die

It took a while to find the trailer for this movie, as yet again there is some debate as to what it’s actually called. The cover is pretty insistent on ‘Too Hard to Die’, which is awesome. But the movie itself would rather go by the name of ‘Detour’, which is shit. The movie looks great though (and has more Busey).

YES! This is more like it. It’s Mandroid! Yay! This is definitely getting a watch as soon as possible. Check this trailer out and see if you’re not also sweaty…

Rutger Hauer is another one of those actors who apparently can’t read the scripts he’s given. Case in point, this utter nonsense…

The Stink of Flesh

Holy shit in a sandwich, this looks AMAZING! Terrible, but amazing. Except, I’m not really sure what a ‘Hellinger’ is, or even how to pronounce it, but I don’t care. This movie goes to the top of the pile thanks to this stunningly mental trailer…

Any movie with killer robot antics and Mathias Hues immediately wins my vote. I’m looking forward to this, just so that I can prepare for the inevitable future.

That’s all for the recent additions. The collection…it’s like it’s…ALIVE!!

Don’t forget, if you have a specific suggestion for a Bad Movie – Bad Review, then leave a comment and let us know!