The Amazing Bulk – A Guest Review

In today’s BMBR guest review, EZeggnog brings us all a look into one of those examples of a try-hard ‘bad movie’ that fails for the wrong (or is that right?) reasons. 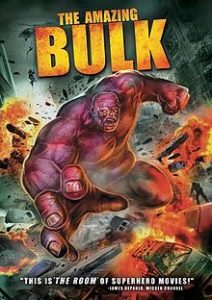 In layman’s terms, a movie made with the sole intent of being terrible, low-brow trash on purpose will be far more likely to be not entertaining, but instead will be an excruciating experience that will make the most-seasoned bad-movie-watching neckbeard balk in repulsion.

Reader, I want you to look at the above image. Just take a few moments out of your busy day and have a good long look at the abomination before you. This purple horror is but a morsel of the shit smorgasbord of ‘special’ effects in The Amazing Bulk. Now upon first viewing of this movie, many people, myself included, will see these effects and assume that Lewis Schoenbrun, the director, had a budget smaller than the cost of the McDonald’s dollar menu. But after the first twenty minutes or so, it becomes abundantly clear that Schoenbrun and his three writers (I don’t even know how you can have writers for a movie that’s a complete ripoff of The Hulk) made The Amazing Bulk with the express purpose of being a terrible movie.

The effects are not only awful to look at, but many don’t even make any sense for the scene. For instance, when the antagonist of the movie Dr. Kantlove (Dr. Strangelove, get it?) is introduced, he spends a scene demonstrating how evil he is by killing one of his own henchmen with a laser gun. Sounds like typical villain fare so far, right? But what I failed to mention is that this henchman is no ordinary henchman. His uniform consists of a black t shirt, jeans, a plastic shield, and a toy axe. The area he stands in during his own death is not Dr. Kantlove’s castle, but a medieval dungeon splayed across a green screen.

Now back to the original point: why would someone attempting to make a decent movie do something so utterly retarded? Well, it’s rather obvious isn’t it? Schoenbrun didn’t want to try at a decent movie, he wanted to make a “ha ha look how shit it is” type of movie. And this blatant attempt at good-bad movie humor is scattered throughout the film. From terrible lightning effects to cars whose sizes don’t match up with each other, the laziness is abundant and insulting.

If you wish to know the plot of this trainwreck, look no further than the Hulk’s origin story. Yep, the makers of this travesty couldn’t even be bothered to come up with their own original story so they just stole everything from the Hulk. It’s beat by beat the beginning of Bruce Banner’s story but with a few name changes and even worse effects than the Lou Ferrigno Hulk TV show.

Betsy Ross, General Ross, and Bruce Banner all feature throughout this movie with only their names altered to avoid copyright infringement. The one ‘original’ part of this dumpster fire is the character of Dr. Kantlove, who serves no other purpose but to force a ham-fisted attempt at comedy by having a fat german man act eccentric.

I will not go any further into the plot of this movie for your sake and mine. Just know that this movie is The Hulk with less money behind it and about a dozen extra chromosomes injected straight into the medulla.

There are no laughs to be had with this festering cesspool of repugnance, only groans of pain and gasps of complete disbelief. This movie needs to be erased from existence, along with lifetime sentences issued to each and every person involved in this shitshow on the grounds of crimes against humanity.