Ahh, Japan. Is there no end to the things you must enhance with giant mechs and slapstick karate? Of course there isn’t, and today we have Bad Movies Redditor Anschluss11 who will prove that sometimes things translate just fine, thank you very much.

The 1978 Japanese Spider-man TV show could be summed up by the first two lines from its opening theme song. The first one being…

Please fasten your seatbelts, secure your helmets, put on them fine looking sunglasses and prepare for lift-off.

Takuya Yamashiro is a 22-year-old who likes nothing more than to ride his dirt bike. On a day not much different from yesterday he… Wait, what is that?!

A meteorite crashes into Earth and Takuya’s father, Dr. Yamashiro, being a space archaeologist heads over to the site to investigate it. Oh no, what is this? A monster roaming around the crater! Watch out Dr. Yamashiro! But it is too late as the monster has slain him.

Takuya, back at home getting worried about his father, jumps on his bike and leaps to the crash site. Oh no! Father was killed to death 🙁 Takuya screams out of pain holding his father’s limp body, tears and boogers filled with sorrow glide down his face and onto father’s trench coat. 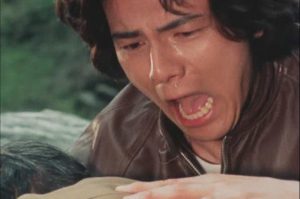 Takuya’s boiling blood demands answers! Wait, there are dinosaur footprints in the dirt leading to a cave near the crash site. Let’s investigate!

A human is inside – ha! This must be the murderer. But ’twas not! In the cave, alone and weary, stands Garia. An alien and last survivor from the Planet Spider, which is located in the M77 Nebula of the 17th Milky Way. 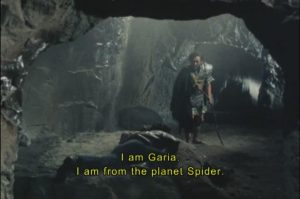 Garia explains that Dr. Yamashiro’s killer is a Machine Bem, an evil creation from the even eviler galactic terrorist, Professor Monster and his evil Iron Cross Army (ICA) who after cold-heartedly slaughtering the inhabitants of Planet Spider 400 years ago came to Earth in order to research the Machine Bems and eventually slaughter Earth’s population, because.

Garia followed Professor Monster across the galaxy in order to avenge his people but amid their big showdown in the age of Japan’s civil war, had gotten trapped in this cave full of poisonous spiders. Enduring their bites and poison he was boldly waiting to appoint a worthy successor to stop Professor Monster.
The two bond over their mutual enemy and newly found love for murdering murderers so Garia decisively injects Takuya with his own blood thus making Takuya – Spider-Man! Half man and half man equipped with a bracelet containing the Spider suit, Spider string, Spider net and a communicator. 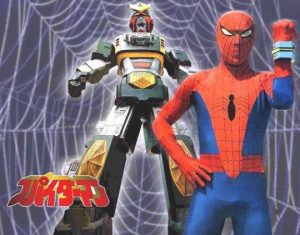 As Garius transforms into an icky spider, Spider-man is ready to take on Professor Monster, save the world and drink the sweet juice of revenge! 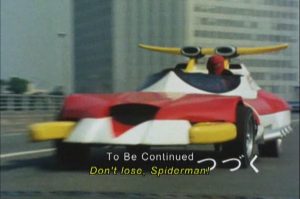 Btw, if you are worrying, it was the 70s so AIDS and Hepatitis C are not a thing yet – injecting other people with your blood using a questionable syringe in a filthy cave is completely fine.

The structure of episodes in general follows the same points (these are my arbitrary points made up to help explain):

1. Takuya rides his bike; frolicks with his siblings and girlfriend

2. A new Machine Bem and the ICA terrorize/steal/attack/abduct something/someone

3. Spider-man finds them, fights off the ICA henchmen (Ninders)

4. Spider-man fights the Machine Bem until it grows in size

5. Spider-man calls upon Marveller, transforms it into Leopardon, fights large Machine Bem and kills it with Sword Vigor

* there are a few episodes which do not follow this structure

Since the average length of an episode is 20 minutes, to allow for all of this to unfold within each one, they are edited as to play out in a very fast-paced momentum. Many fast cuts, quick dialogue exchange, lots of zooming in and out, close-ups of faces, jumping from location to location. The editing is tiptoeing the line of sensory overload but still manages to maintain a logical and smooth flow of scenes. At the beginning of the show, the episodes were primarily action oriented. 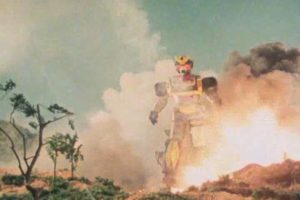 They would rush through the first 2 points and focus on points 3-5. Usually it would involve a longer point 3 accompanied by the soundtrack. But as the show progressed, more attention was put on dialogue and character development. 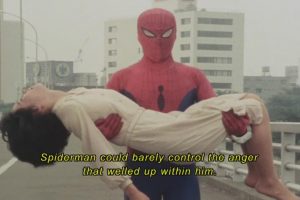 Thus the last 3 points of the structure would be squeezed into the last few minutes of an episode while points 1 and 2 were more emphasized and stretched. In addition, emotions gradually began playing a bigger role as innocent people were dying left and right. Anger and sadness were two main emotions explored. By the end of the show, Spider-man had cumulatively a whole village die in his arms, which I’m pretty certain left an impact on his psyche. 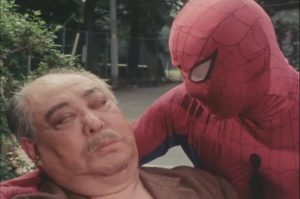 Intertwined within the 5 points over the course of episodes lies the narrative. On one side, Spider-man is looking for Professor Monster in order to avenge his father’s death and Garia’s death and the deaths of the people from Planet Spider and all the mentioned dead people from Earth and is also trying to stop him from invading Earth with the Machine Bems, whilst struggling to maintain a low profile as Takuya Yamashiro. Quite the task.

On the other side is Professor Monster, who is trying to get rid of Spider-man so he could invade and consequently murder the people of Earth. Helping him is Amazoness, commander of the ICA and Professor Monster’s right hand who is dedicated in discovering Spider-man’s identity. To do this she infiltrated the human world and became editor of Woman Weekly magazine putting out a bounty on Spidey’s real name and face. 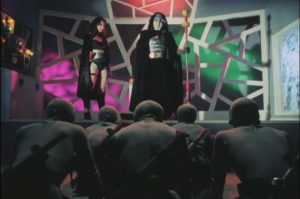 When acquiring the rights from Marvel, Toei Company (creators of the show) gained full freedom over the story and characters (you don’t say…). In order to successfully market the show to younger mecha-loving Japanese audiences, they decided to go with a robot as Spider-man’s main fighting tool. To justify a robot, the show’s mech designer proposed the whole alien backstory instead of a radioactive spider bite. 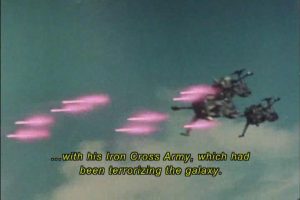 So, was it a success? Was sliced bread a success?!

Although gaining some backlash over heavily deviating from the source material, the show kicked ass. The special effects were amazing for the time (just for time-period-to-special-effects ratio reference – “A new hope” came out a year before this), fight scene choreography was professionally orchestrated, costumes were beyond creative and the large Machine Bem vs Leopardon battles were blowing people’s minds. Even papa Stan Lee nodded with approval. 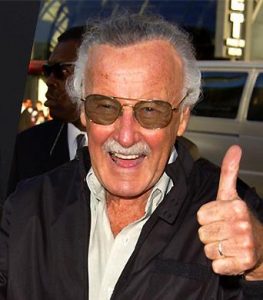 Introducing a large mecha (Leopardon) into a live action series was something different and not before witnessed in 1978, thus making it a giant step forward for Japanese tokusatsu shows. Sure, there were robots in the Godzilla movies, but all of those were self-operated as opposed to having cockpits and a pilot.

With Leopardon being such a hit, the concept was immediately brought over to the Super Sentai franchise, which would eventually become the source for the Power Rangers franchise. Besides Power Rangers, western cinema would introduce their audiences to the mecha concept for the first time with the movie Robot Jox, from1990. Which didn’t do so well, to put it lightly.

Somewhere mid-through the series, the Leopardon suit was lost/stolen so all further episodes featuring Leopardon only contained stock footage of its fights from the early episodes. Oh, and Leopardon is acknowledged as official Spider-man canon. 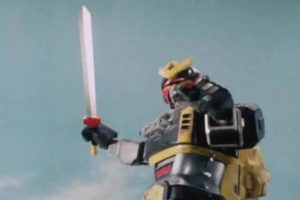 “Ok people, we got the rights for Spider-man from Marvel. How do we approach this? Give me ideas!”

“How ‘bout we give him a giant robot which he can operate to fight monsters?”

Thoughts of a puny child…

Upon the first encounter with the initial two episodes, my inner child rushed outside and took complete control over me. I was 6 years old once again. My eyelids went on a vacation for 40 minutes and I felt no need to breathe. Or pee.

Aliens, monsters, robots, spaceships, lasers, explosions, people dying, cars flying AND Spider-man?! All I got as a kid was the Nicholas Hammond series and I didn’t really enjoy that as it had way too much serious dialogue and way too little fun action. 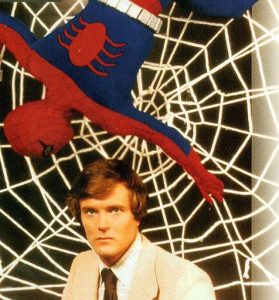 This version of Spider-man, on the other hand, proved extremely entertaining to me. The main structure I mentioned earlier is every-now-and-then ignored so we get a refreshing change of pace. This would be an episode not containing a Mechanic Bem and Leopardon battle, or a spooky episode, or just a heart-warming one where Spider-man donates his blood to save a kid whom the ICA ran over with a truck in an attempt to murder him cause the kid witnessed them stashing missiles in an abandoned warehouse. 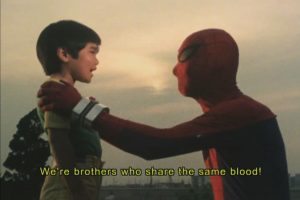 These prevent the formula from becoming stale and keep you wanting more.

Moreover, I was truly moved by the emotional tone of some episodes. No joke. While the tone of episodes isn’t the stronger side of this series (it can be all over the place), some of them delved into darker territory (suicide, patricide, poverty) and turned out much different than the rest. Those really stuck with me despite all of the silliness this show contains.

Of course, there are some parts which didn’t really do well with me. Watching certain scenes over and over in the majority of episodes (Spider-man calling Marveller and the Leopardon transformation, the Sword Vigor executions) as well as repeating point 3 from the structure over the course of episodes does sometimes challenge your attention. But those are really small bugs you definitely cannot hold against a magnetic, engaging and light-hearted show which was generous enough to give us the gift of ‘Spiderman boogie’. Enjoy!