Bad Movie Redditor EZeggnog brings us a glimpse in to the wonderous mind of one Amir Shervan and his brand of sideways movie making and general insanity.

The name “Amir Shervan” is somewhat infamous amongst the so-bad-they’re-good movie fan base. The man is in a way the personification of the American Dream – An Iranian who moved to the USA during the Iranian Revolution of the 1980s, taking with him his meagre filmmaking knowledge from his home country and graciously gifting us Westerners with his cinematic magnum opuses (Or is it opi? I flunked Latin). But unlike other immigrants turned filmmakers, such as Alfred Hitchcock or Charlie Chaplin, Shervan didn’t bother to include pesky Hollywood tropes like originality or a script. Instead, this Iranian genius gave us some of the most infamously terrible b-movies in existence, including the one I’ll talk about in this review. Ladies and gentlemen, I give you the masterpiece that is Hollywood Cop.

Amir Shervan movies have a tendency to follow the plot of every 80s cop movie beat-for-beat. An evil crime boss, an attractive female love interest, two detective partners that exchange ‘witty’ banter, a comedy relief character, an exciting chase scene, a psychologically unhinged evil henchman, etc. Classic action movies such as Lethal Weapon and Beverly Hills Cop have included these tropes and still managed to be unique and entertaining. Seeing as how Mr. Shervan was a visionary at his craft, he of course decided to rip off both of the aforementioned films, along with every other buddy cop movie in existence.

Hollywood Cop starts off with a band of evil henchmen being sent by Mr. Evil Crime Boss (I don’t remember his name, sue me) to kidnap the child of Joe Fresno, a sleezebag who stole 6 million dollars from the mob. After an awkward exchange between Mr. Evil Crime Boss and his right hand man Animal, the mob lackeys perform a raid on the rural commune that Fresno’s ex-wife Rebecca and son Stevie live on. Why do Rebecca and Stevie live on a rural commune? Fuck you, that’s why. 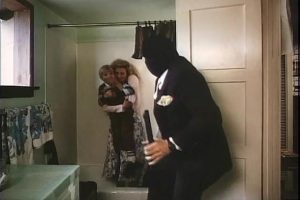 Instead of doing the easier and obviously more intelligent option of stealthily sneaking into Rebecca’s house and kidnapping Stevie under the cover of night, Animal and the rest of the goons charge into the commune in broad daylight and proceed to violently murder everyone in sight. After many a bystander are filled with buckshot, Stevie is taken from a frantic Rebecca, who is told that unless her ex-husband gives back the 6 million he stole, they’ll kill her son. They also tell Rebecca that if she attempts to get the police involved in the ransoming, Stevie dies. So what does this distraught mother do in order to safely rescue her son? Why go to the police station of course. 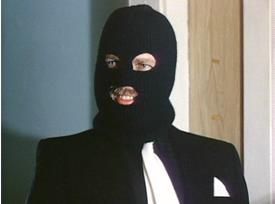 But to Rebecca’s dismay, the police refuse to deal a group of mobsters who’re holding a child hostage. Dejected, a saddened Rebecca walks out of the police station and immediately runs into a young Ted Danson look-alike and the protagonist of the film, Detective Turkey. No, that’s not a mean nickname some bullies gave him in sixth grade, his name is actually Turkey, or Turk for short (I think someone calls him Turquoise at some point in the movie too but my mind was too comatose to remember it fully). Anyway, Rebecca stumbles upon Turk right when he takes off across the street to handle a rape and robbery occurring in a hotel. Hearing from the hotdog vendor that Turk was just at that Turk is a “good cop”, Rebecca wonders aloud whether or not he could help her rescue her son. Yes, because what an entire police station wouldn’t do could easily be solved by one mullet-sporting Dirty Harry knockoff.

What follows is one of the most awkward-looking/sounding chase scenes/shootouts that’s ever been put to film. The rapists/robbers engage in quick sprints down baby blue hotel hallways before taking what seems like 30 seconds to die after being shot by the pursuing policemen. One rapist even gets beheaded by the not-so-subtly Arab husband of the rape victim right in front of Turk. 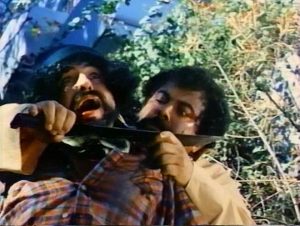 This bloody shootout prompts the stereotypical “police chief chewing out the loose cannon character” scene that’s mandatory for every action movie about a cop, only this time we as an audience are graced by the presence of the legendary Cameron Mitchell as the no-nonsense police chief. After this by-the-numbers police chief lecture in which Cameron tells Turkey that his antics are turning his stomach into a “tums festival”, we’re introduced to Turk’s token black cop partner Jaguar (no, I’m not making any of these names up). Well, introduced is not the appropriate word. More like, he just shows up in the next scene when Rebecca confronts Turk about her little Stevie’s kidnapping. Apparently Amir’s screenplays are just too brilliant for characters having pesky traits like ‘personality’ or ‘uniqueness’. Instead, every single character has to be a cookie-cutter replica of one of the character archetypes that’ve been done in far more competent films. But I digress. 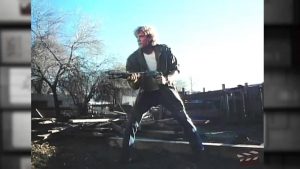 Turk and Jaguar agree to help rescue Stevie from his evil captors, who’ve decided that the kitchen of what appears to be someone’s grandma’s house is the best place to keep a valuable captive. It’s even more efficient if you leave said captive in the kitchen alone without any supervision. The only thing stopping Stevie from fleeing the battered-up grandma house is a flimsy hook lock on the back door (which he can reach through the window) and a vicious-looking Doberman in the backyard. This is where the movie’s story and tone take a sharp turn (practically off a cliff). Turns out that Stevie is the next Caesar Millan because he manages to befriend the deadly guard dog in a matter of minutes. He even manages to get the Doberman to paw at the door while Stevie unhooks the latch, which he could’ve done right off the bat before the mobsters stuck the guard dog in the backyard. 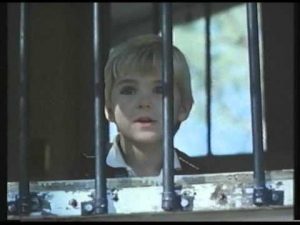 After his new best buddy ‘helps’ him get free, Stevie makes a beeline for a nearby field while his captors, seeing that he’s escaped, pursue. Now you may be thinking that this is the part of the movie where Stevie manages to outsmart the mobsters but must make his way back home through an unfamiliar landscape ala Baby’s Day Out or Home Alone 2. But alas, Mr. Shervan’s epic is far too competent for such a drab plot point. Instead, the mobsters quickly catch Stevie and shoot the dog. End of scene. Why did this scene need to happen? Because making a movie that’s 90 minutes long is hard.

Meanwhile, at a titty bar (cue Batman music), the Trio of Incompetence track down Samson, the cousin of Joe Fresno and owner of the aforementioned den of ill repute. Turkey manages to obtain Fresno’s address off of Samson by using his deadliest police skill: asking politely. But this straightforward task that a first grader could’ve performed can’t be completed without some sort of completely idiotic activity taking place. So to put a little pinch of ‘sexiness’ into the movie, Jaguar engages in a three way oil wrestling match with two nameless bimbos in a kiddy pool on the bar floor. I mean, why have characters that walk, talk, and generally act like mentally sane human beings when you can have one of your protagonists strip naked and squirm around in a kiddy pool with two oiled-up hotties? 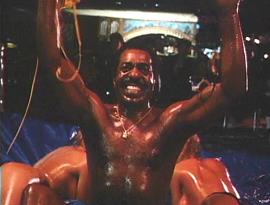 The gang manages to find Joe Fresno’s home where they catch the devious thief sitting in his backyard, enjoying the four prostitutes he hired dance awkwardly in front of him. I mean, what else are you going to do with 6 million dollars? Rebecca informs her ex that their son has been kidnapped by the mobsters he stole from, prompting the group to start forming an intricate scheme to get poor little Stevie back. What is this brilliant plan you ask? Why, fill a duffel bag with fake dollar bills and hope the bad guys don’t open the bag and see that Joe’s tricking them. Machiavelli doesn’t have shit on these geniuses. Does this plan work? Of course not, fuck you. Almost immediately Mr. Evil Crime Boss opens the bag, sees the bills are fake, and shoots Joe in the back as he attempts to run away with Stevie. 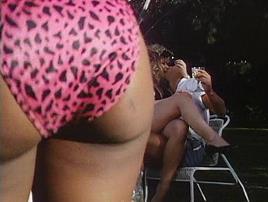 Way to go Joe and Turkey. 10/10 best strategy. So now Joe dies from the dozen or so bullet wounds in his abdomen, his son covered in his cancer-infested blood. Oh, did I forget to mention the fact that before Joe dies, he tells his five year old son that the reason he had to steal 6 million dollars and abandon him and Rebecca was because he had ‘blood cancer’. What kind of blood cancer? Why did Joe spend his money on prostitutes instead of cancer treatment? Why did Turkey, a trained detective, think that handing a dangerous crime boss a bag full of Monopoly dollars was an acceptable plan? I think you already know what I’m going to say. 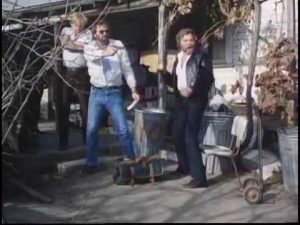 Well the group’s plan fails, leaving Stevie still in the clutches of the bad guys and Joe Fresno dead, face down in the dirt. Turkey and Rebecca realize they need a new plan, an even better strategy that will surely result in Stevie’s freedom. Now I’m going to be honest with you, around this time in the movie my brain started to black out, either from the booze or the movie’s mind-boggling incompetence. All I can recall is that a stereotypical climatic shootout takes place between the protagonists and the mobsters. Bad guys die, good guys win. Stevie goes free and everyone lives happily ever after (except Joe and the Doberman). 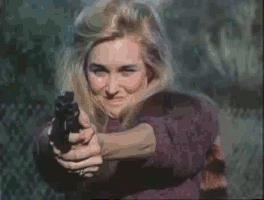 Hollywood Cop is the one of those so-bad-it’s-good movie that’ll keep you entertained and laughing the whole way through, especially if cliche, low-budget cop movies are your cup of tea. It’s no surprise that the man who generously gifted us with the cinematic milestone that is Samurai Cop was also kind enough to provide the public with this gem as well. While not nearly as hilarious as Samurai Cop (but honestly, what is?) Hollywood Cop still manages to rip off every buddy cop movie ever made while not being a complete pile of mind-numbing shit. I’d recommend this flick to any B movie fan, whether they’re seasoned or new. Just get your Tums and Smirnoff ready, because you’re going to want it by your side through the whole ride.

Japanese Spiderman – A Guest Review ‘You Can Be Cured!’ – A Bad Review