In the latest BMBR guest review, we welcome EZeggnog from the Bad Movies Reddit community to slap us across the face with the 1988 cult classic ‘Hell Comes To Frogtown’, staring Rowdy Roddy Piper. Yeah, him. 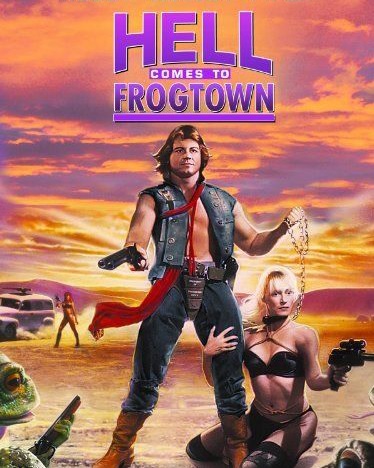 The realm of B-movies is peppered with blatant Mad Max rip-offs. Movies like Steel Dawn and 1990: Bronx Warriors shamelessly attempted to cash in on the vehicular warfare craze birthed by George Miller’s masterpiece and, while being entertaining in their terribleness, cannot hold a candle to the original. But while many of these movies are low-budget Italian trainwrecks with no originality or apparent budget, there is one film that stands above the rest. One movie that is so batshit insane in its story and execution that it might just reignite your faith in humanity.

Ladies and gentlemen, I present to you Donald J. Jackson’s tour-de-force Hell Comes to Frogtown – a film centered around the character of Sam Hell, played brilliantly by the WWF superstar Rowdy Roddy Piper, one of the few professional wrestlers able to successful shift into Hollywood. It’s a film with a plot so goddamn ingenious that it would put the hypothetical lovechild of Stanley Kubrick and Alfred Hitchcock to shame.

Hell Comes to Frogtown begins like many Mad Max knock offs do, with a grim voice over ominously describing how the world was blasted to shit by evil politicians, with humanity inhabiting a harsh wasteland filled with violence, crime, and general dissatisfaction amongst the populace. But this particular movie cannot simply rely upon the standard post-apocalyptic movie formula for its story and plot.

Oh no, ladies and gentlemen, along with the standard Mad Max fare, the world of Hell Comes to Frogtown is also populated by mutant frog people that were the result of immense radiation from nuclear weaponry. Oh, and the majority of the male population of Earth was wiped out during WWIII. So, now the majority-female government is desperate to repopulate the human race, and the only man for the job is Sam Hell, a muscle-bound nomad who’s captured by a squad of government warrior-nurses who tracked him by following the slew of pregnant women he’s left in his wake. Now firmly in the possession of the government branch known as Med Tech, Sam is ordered to track down, rescue, and knock up a special caravan of fertile human women who’ve been captured by the frogs and taken to Frogtown to serve as the frogs’ sex slaves.

And they say creativity is dead in Hollywood.

Hell Comes to Frogtown is a peculiar film that manages to do what few B movies can: blend an entertaining narrative with copious amounts of boobs and blood. The epic quest of Sam Hell is filled with naked women throwing themselves at Piper’s feet, tearing their flimsy shirts open and practically begging Sam to shove his electrified gonads into them. Centinella – a hard as nails guard, Spangle – a nurse, and even a frog stripper attempt to seduce Sam, all failing due to his rather explosive package. Ironically, the only woman Sam ever sleeps with on screen is given the Hot Cosby by Spangle so that she’s more “agreeable” in her words, for Sam.

Speaking of which, the inhabitants of Frogtown are undoubtedly one of the biggest pluses in the movie. The rubber masks and hands all look authentic, with working mouths and slime coating the amphibious skin. While most backround characters with stereotypical post-apocalyptic garb have their faces covered, the more important characters such as the aforementioned Commander Toady and his second-in-command Bull look surprisingly commendable considering the movie’s obvious lack of a budget. The eyes blink, the fingers bend, and each character’s outfit feels unique.

Overall, Hell Comes to Frogtown is, in my opinion, one of the most entertaining and unique entries in the B movie genre, and that’s a difficult feat to manage considering how batshit insane some of the movies and their directors can be. Roddy Piper is able to blend his action chops with an entertaining dose of humor without becoming teeth-grindingly embarrassing. The supporting cast of characters all perform their parts well, which is saying something considering the story they had to work with. The high points of the film are definitely the costumes and prosthetics of the frog people. While many low budget Mad Max rip offs can be an absolute pain to sit through, Hell Comes to Frogtown presents a special brand of ‘holy shit this is fucking insane’ to an audience. I cannot recommend this amazing motion picture enough to anyone and everyone interested in good-bad movies.