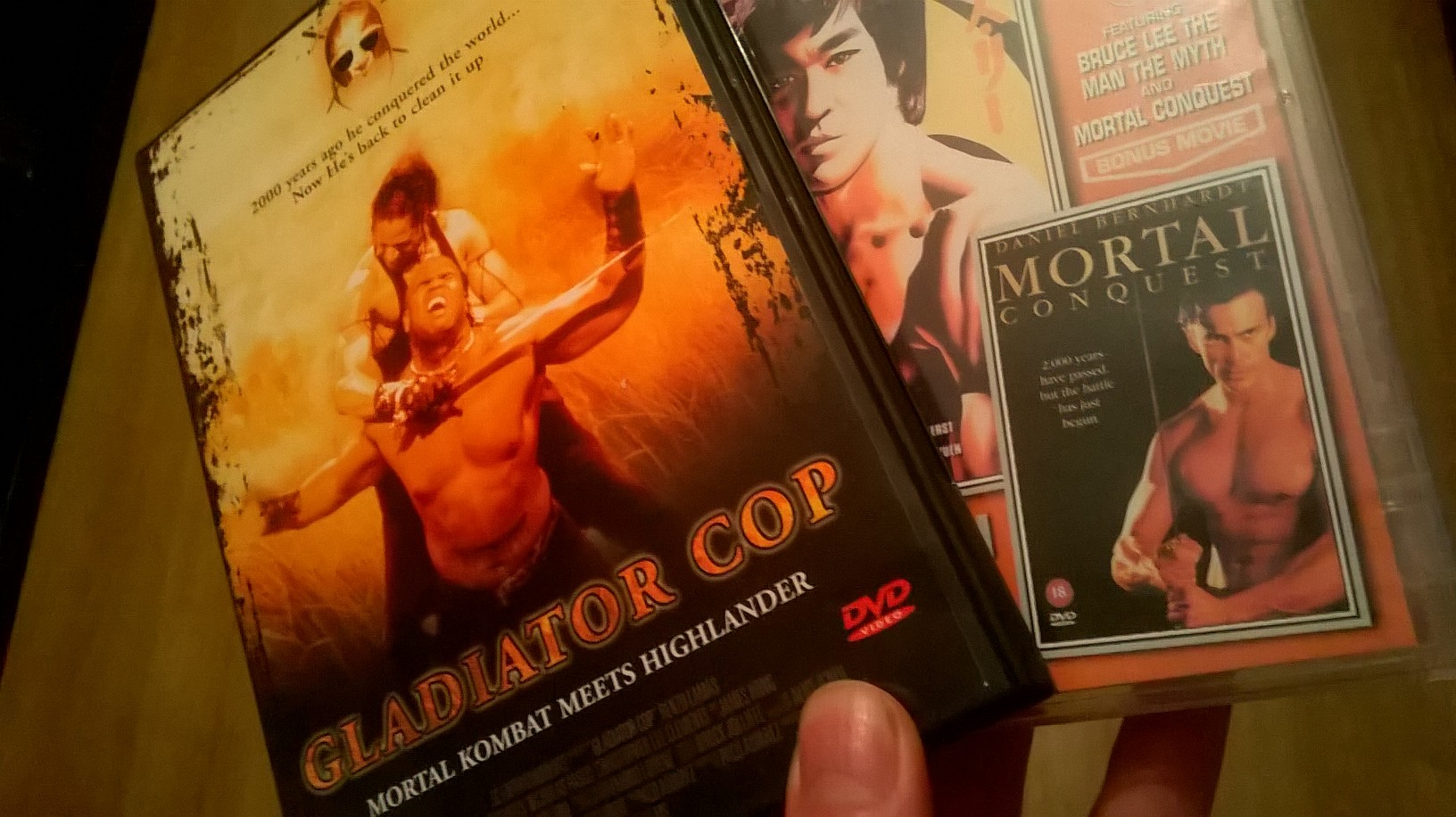 Having bled from my ears and eyes on two separate occasions, I can confirm that the creators of Gladiator Cop and Mortal Conquest took some rather unwarranted liberties with their subject matter. Mostly by taking said subject matter and submerging it into a bathtub full of steaming insanity, ignoring its pleas for mercy, until it finally stopped kicking and drowned. With the desired effect achieved, these psychotics spent the rest of the afternoon shipping its still twitching carcass out the back door as direct-to-VHS corpses that they hoped no one would notice. Basically, these movies are stark-raving mad, and fucking terrible, is what I’m getting at.

But what’s the reason for picking these two specific films for one review, I hear you ask. Well, these two films…

How’s about a DNA test, by way of some plot synopsis?

Gladiator Cop is a whimsical tale about the worst policeman in America, who appears to have psychic abilities that involve sticking his fingers in the wounds of stabbing victims, causing him to experience nasty electrical shocks and hallucinations. He finds out that a sword that makes people invincible was stolen from a museum, and that it belongs to him because he is the (no shit) reincarnation of Alexander The Great.

He then must defeat the giant man-slave of the actor James Hong, who we learn is a two-thousand year old reincarnation of Parmenion – The guy who killed Alexander. He must do this by entering into an illegal underground death match tournament with an assortment of eccentric, and often impractical (and sometimes telekinetic) fighters dressed up as warriors from different historical periods.

With me so far? Good.

So what about Mortal Conquest?

Mortal Conquest is about a cop who finds out that a sword that makes people invincible was stolen from Hong Kong, and that it belongs to him because he is the (no shit) reincarnation of one of Alexander The Great’s soldiers (?)

He then must defeat the giant man-slave of the actor James Hong, who we learn is a two-thousand year old reincarnation of Parmenion – The guy who killed Alexander. He must do this by entering into an illegal underground death match tournament with an assortment of eccentric, and often impractical (and sometimes telekinetic) fighters dressed up as warriors from different historical periods.

You may have noticed some vague similarities between both synopses, seeing as these movies are almost identical, but will someone please explain to me what…the…fuck?

What appears at first to be a highly perplexing coincidence is exceptionally straightforward, but a thousand times more confusing, as Nick Rotundo is the gentleman responsible for giving birth to twins, so to speak. But…why? Maybe it’s simply because the original pet project of Nick Rotundo was so balls out retarded that he had to repeat the process, because as we all know, repeating the same thing over and over again whilst expecting different results is the best way to convince people that you’re absolutely fine. Plus, as you can clearly see from this recidivist’s IMDB, the mastermind behind these two movies only made these two movies…and nothing else, most likely because that was the point at which the guys in the white coats calmly took away his clapperboard and walked him slowly into a padded cell.

Of course, this bizarre repetition would have been perfectly acceptable if the story itself was so preposterously awesome that it had to be retold only four years after the first, but…well…did you read the synopsis up there? Yeah, these movies are basically one man’s throbbing hard-on for violent death matches and Alexander The Great, which as fetishes go, is fairly specific.

And yes, to think that this story was so important it needed to be told twice takes either a woefully underdeveloped brain, acute amnesia, or brass balls so big they would snap your spine in half. Twice?

Whilst at a glance we are essentially looking at the same film, there are obviously differences between both movies. Most notably, the first being an almost unwatch-able pile of nonsense, and the second being a barely watch-able pile of steaming shit.

In Gladiator Cop’s case, it’s insanity was on display long before I even opened the DVD case, as its cover misspells the name of its main star, insisting that the actor be known as ‘Renzo Lamas’ rather than the ‘Lorenzo Lamas’ his parents named him. This is bold behaviour considering Lorenzo Lamas knows his way around a sword, and was in Falcon Crest. Don’t fuck with him basically.

I was also given an unattributed endorsement that helpfully stated “Mortal Kombat meets Highlander.” I originally assumed that this was an awesome claim to the contents of the film, but there is not one thing about Gladiator Cop that even fleetingly resembles Mortal Kombat or Highlander. So I am forced to assume that this statement instead refers to the time when Mortal Kombat was introduced to Highlander by Gladiator Cop, and they all went to the park to play on the swings.

This blurb would have been more fittingly plastered all over the cover of Mortal Conquest though, as at least that title shares a word with Mortal Kombat, if absolutely nothing else. But what about Gladiator Cop? Is it as sideways mental as the synopsis would have us all believe?

Historical Revisionist Cop opens with an obligatory Terminator style, blue neon text title crawl. Except here the title is set to smooth 90’s sax-jazz, which for some reason movies from that decade insisted was cool, but has since been proven creepy and annoying by every decade since. We are shown the interior of a museum, and a tour detailing an exhibition of Alexander The Great-related left-overs. The group arrive at the centerpiece of the exhibition – A to the G’s very own sword. The ageing director of the museum then appears, and begins to rub his genitals against the sword’s glass display case whilst whimsically babbling about reincarnation with an elderly thousand-yard-stare.

All very normal so far…actually no, it isn’t normal at all. But if the plot of this film is about death match reincarnations of real life historical figures, then I suppose an old man’s public sex crimes are a welcome display of normality. The first set of movie shenanigans take place after closing time, when the director disables the security systems for the sword exhibition room. Once he has performed this skulduggery off he goes to attend one of the most stupid things I’ve ever seen. Namely, a (no shit) high-society illegal underground fencing tournament.

Whilst doing his best to enjoy what is essentially two ballet dancers poking each other with car aerials, a team of no-nonsense burglars make off with Alexander The Greats sword, pausing to murder all the security guards first. We then cut to a sleeping Lorenzo Lamas, who is dreaming and/or remembering about Alexander The Great, except he clearly has his eyes open, probably because this hallucination/flashback sequence was filmed in a swimming pool full of Vaseline and, like us, he couldn’t see what the fuck was happening.

It was at this point that I first decided to question the research capabilities of whoever made this drivel and actually look up some basic facts about Alexander The Great, and it took all of five minutes to confirm that at no point in his career was Alexander The Great ever a gladiator, or a cop.

I’m no historical researcher, but that honestly wasn’t difficult.

Anyway, we are introduced to the love-interest of the movie, played by none other than ‘Ducky’ from Sweepers.

This woman is apparently the curator of the museum, and Lamas’ girlfriend, which is convenient given that he is now investigating a theft from where she works. However, he appears to be doing this without the express permission of his superiors, as for some reason him and ducky break into a morgue so that he can touch up the corpses and hallucinate. So he really is psychic. Just like Alexander The Great..?

As Lamas does his thing, we are shown more underground death battles, with ever increasingly extravagant looking contenders.

With the organisers of these tournaments clearly ignoring basic health and safety regulations (and any regard for being caught by the authorities), bodies are turning up all over the city with more stab wounds than a pin cushion. This of course gives Lamas something to stick his fingers in and have more psychic visions.

At one point a truly uncomfortable scene occurs, in which the director of the museum brings a prostitute with him to a death match, except on their way there she fellates him. Great for that guy, I’m sure, but terrible for us, as she couldn’t be a day over 20, and he looks like he’s been collecting his pension for at least that long.

As Lamas finds himself embroiled in shenanigans-illegal, the film introduces both James Hong, and James Hong’s choice of combatant.

And we yet again have even more reason to suspect that no one bothered to mark Nick Rotundo’s homework, as everything displays a dazzling lack of geographical knowledge. How so? Well, this giant of a man is introduced by the name of ‘Mongol’, and is wearing Mongolian looking attire. Fair enough. Except he is also introduced as coming from (no shit) Persia, which doesn’t even fucking exist any more, so we’ll just assume the announcer meant Iran. This, is obviously daft, but take in to account that his boss, played by James Hong (an American actor of Chinese descent) is playing the role of someone from Greece, who is participating in a death match in America. It’s only then that you really get a feel for how some kids were left behind in school, if not lobotomised entirely.

Iran, America, Macedonia, China, Mongolia, and fucking Persia are NOT the same things, you lunatic.

The director clearly repressed his history and geography grades before embarking on these films, but if these topics were an example of him playing to his strengths then it’s no God-damn wonder he only ever made two of them.

…and a cop who thinks it’s okay to play with a switchblade whilst interviewing a distraught rape victim, which it definitely isn’t. At one point, during one of the seemingly unending displays of appallingly coordinated fighting, one of the best things in the history of cinema takes place. Behold…

This film might be unforgivably moronic but that was pretty damn awesome, I’ll admit.

Eventually the climactic finale of the movie happens, with Lamas besting his opponent with the help of…wait, what?

A sniper? But hang on a second, who was…?

Whatever. Something definitely important happened, as James Hong now has white powder all over his face, suffers a epileptic seizure, mumbles something, and disappears.

…and then the film ends.

Actually, I would be giving the movie far too much credit to say the film ends, as that implies an ending. No, the movie just stops. The museum director is decapitated for some reason as we see another sword close-up (set to more sax-jazz), and then everything fades to credits as quickly as possible. I must have stared at my laptop for a good 60 seconds, trying to figure out what the fuck I had just seen, or more specifically, what the fuck I hadn’t seen. Yes, the main bad guy dies, but the hero never even leaves the building before things just stop. Strangely amazing, and extremely annoying.

So what about attempt #2?

Trailer Trash: Episode one Another Yeti A love story: A Life on the Streets – A Bad Review