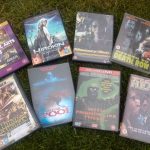 The day With Friends Like These graced my garden

Kathleen Kinmont (the next Schwartzeneggar) and her missing leg

Not to be confused with The Terminator

One of the funniest movies ever made

Chuck Norris as a homeless lunatic

Godfrey Ho we love you!

Is the Eagle American, or is he?

Staring Eric 'I don't care about the script' Roberts

Some racist nonsense from Mr Butthorn

More of the bad stuff...

One for the whole family!

Words fail me. Bound to be a BMBR review someday...

KING OF THE KICKBOXERS!!

Behold! The worst movie ever made!

Yet more for the tower...

Robb Lowe? Get out.

Will I watch them. No.

Warning, no samurai's appear in this movie

Welcome to the very first episode of ‘The Collection’, from Bad Movie – Bad Review

In this first episode of the soon to be Odyssey Of Awful that is ‘The Collection’, BMBR recounts the humble beginnings of what has now become a legitimate obsessive-compulsive gathering of everything terrible/weird/awesomely stupid in the world of Bad Movies.

Whilst this is a beginning for the series, there is a little bit of history behind it.

I (Defector) began this strange journey on a spacerocket in to weirdness, without realising the first steps had been taken. As many things of this nature do, it did, with a gentle crawl that spoke nothing of the explosive sprint that this avid passion for collecting plastic nonsense would become, and I, as many others have before, simply began to smile at hammy and cheap movies that I would derive entertainment from through means most certainly unintended by their creators. I was certainly not the first to discover enjoyment from the laughably failed attempts of others, or to draw awesomeness from that which others would find silly, but it was definitely new and exciting to me. And let’s be honest, anything that makes us laugh or fist-pump can be infectious and addicting, but in a way that doesn’t require access to laughing gas or class A’s.

Can I pinpoint exactly what movie was the first that I purchased specifically for its unintentional stupidity? Quite possibly, but I think it’s a far greater challenge digging through the sofa of my brain to find what was the first ever film that I found accidentally hilarious.

I’m sure there were others that came before, but I distinctly remember injecting the contents of some colouring-in-competition box art in to a VHS player many years ago, and being greeted by the mind-numbingly woeful, 1983 caravan bonanza Endgame.

And of course, then finding myself losing my shit so hard at all the dreadful brilliance it contained.

I remember that movie well. Myself and those around me laughed, palm-faced, pointed, and browed our collecting furrows at what would become a staple of our late night shenanigans and debauchery. Manys a night was spent mocking the heroic antics of Shannon and his band of idiots with all his fuzzy VHS anti-glory, and I guess yes, the seeds of what would become a true love of the genre, were then first planted.

That would-be trove of almost Academy Award nominees included some real rubbish such as Boggy Creek 2, Death Racers, Bear, and Transmorphers. All of it was bad. Some of it was good.

And then Shit Went to Frogtown, as the old saying goes, as I realised that local second-hand shops were chock full of temptingly promising garbage. And at next to no cost!

And so ‘The Great Splurge’ began, as I visited local outlets and filled bags full of DVD’s every time I found small change I didn’t realise I had.

But things truly would never be the same again when I discovered the ability to make exuberant bulk online purchases of shit films and have them hand-delivered by an increasingly agitated postman.

And the more I collected, the more I watched. The more I watched, the more I exposed myself to what forms the bulk of The Collection, namely terrible and unentertaining Bad Movies, and I realised something – a truth of the fandom, if you will – That this hobby is a diligent search, and an endless one at that, for those tiny, shining gems of utter brilliance and hilarity sleeping peacefully within the rancid mud of cheaply made, poorly produced, widely forgotten crap, that make up 90% of Bad Movies.

It’s a patient sift through the seemingly endless sea of Bad-Bad and (god forbid) the Bad-Boring, in order to find those Good-Bad movies that make not just the search itself worthwhile, but also bring joy to their viewers.

And trust me, when those diamonds brought free of the rough, and given the right kind of open mind, they are entertaining beyond words.

And I guess that’s what BMBR is all about – laughing through the face-palm and then having the opportunity to say to the world…”Hey! Look at this!”
So if you are new to this mad little corner of the movie world, then stick around and discover a few of these priceless treasures and maybe begin your own Bad Movie journey. And for those who already know…isn’t this awesome?!

Bad Movies deserve every bit as much love and attention as any other art form out there. Their value may be unintentional, but valuable as any other thing that puts a smile on people’s faces, they still remain.

So stick with ‘The Collection’, and as that plastic corner of my living room metastasises, we can dig through it together, and see what strange brilliance we can find…

The B to Z Movie Show – Episode One: Rabid Grannies