The Calamari Wrestler – A Guest Review

In the latest BMBR guest review from die-hard Bad Movie Redditor EZeggnog, we delve deep into the inner workings of what the Japanese can create when left alone with no adult supervision. 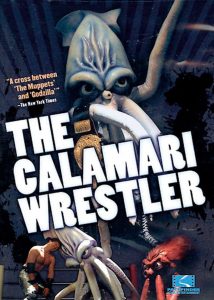 Oh Japan, why on God’s green Earth do you create such bewildering ‘art’? Movies such as Tetsuo: The Iron Man and the infamous House are chalk-full of completely baffling subject matter. Floating heads, ninjas, giant mechs, hopping vampires (yes those are a thing), you name it. If you think humanity has passed its threshold of sanity, there’s undoubtedly some bizarre Japanese film floating out there in the ether to prove you wrong. Now I’m no heavyweight when it comes to off-the-wall B movies, but I think my mind and body have endured enough sensory outlandishness to withstand whatever the next David Lynch or John McTiernan wannabe can throw my way. At least, that’s the mindset I had before I laid eyes upon the treasure this review focuses on. Ladies and gentlemen, buckle up for the semi-aquatic, suplex-packed ride that is Minoru Kawasaki’s The Calamari Wrestler. 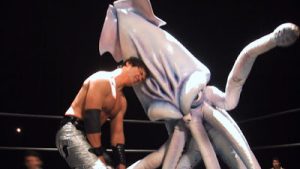 This obvious masterpiece begins with a championship wrestling match between the champ Koji Taguchi and a hapless challenger, the latter no match for Taguchi’s brutal offense and signature maneuver, the ‘Torture Ring Strangler’! But as Koji stands tall after his victory, championship belt held high, a challenger appears: a giant squid! But this is no ordinary giant squid, ladies and gentlemen. This squid not only manages to evade Koji’s attacks and signature move, he devastates the champ with a punishing Northern Lights Suplex! Throughout this whole ordeal, Koji’s girlfriend Miyako recognizes the Calamari Wrestler’s moveset. “Could it be!” she thinks, “that this six foot tall squid wrestler is actually my former lover whom I presumed dead, Kanichi?”

(Edit from TheDefector – What the fuck did I just read?!)

Hilarity ensues from beginning to end. A love triangle between Koji, Miyako, and the Calamari Wrestler who is discovered to in fact be Miyako’s former finance, Kanichi. A fierce rivalry between the squid and Koji ensues, driving the latter of the two to undergo Calamari’s training regime which turns him into the Octopus Wrestler. Did I mention that said training regime requires the trainee to go to Pakistan? No, I’m not lying. A man moves to Pakistan in order to undergo a sacred training process that turns him into a cephalopod. God dammit I love Japan. 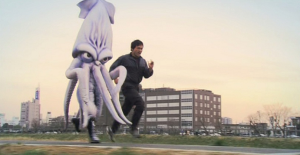 The climax of this monument of greatness is a showdown between the Calamari Wrestler and a deadly challenger: The Squilla Boxer! A squilla, for those who don’t know, is a type of Mantis shrimp. Did i mention that by this time Miyako has dumped Koji for the squid? Oh yeah, and Koji and the Calamari Wrestler are now best buddies. Funny how things work out. But I digress. A pulse-pounding wrestling bout ensues, pushing our tentacled protagonist to his absolute limit until finally, like a phoenix rising from the ashes, he emerges victorious. But that’s not all! It’s revealed that the Squilla Boxer is actually Calamari’s father. Oh, and he’s also Koji’s father. Turns out Calamari and Koji are brothers, apparently. M. Night Shyamalan would be proud. 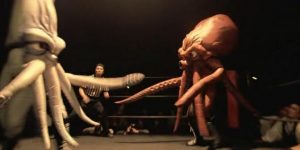 This motion picture is honestly baffling. The costumes, camerawork, and editing obviously had a decent amount of money behind them, unlike so many other movies belonging to this genre. Kawasaki (or whoever was funding this anomaly) even managed to get Yoshihiro Takayama to perform a cameo. Takayama, for those who don’t know, is pretty much Japan’s version of Hulk Hogan, except without the sex tape or racial slurs. But whoever it is that gave Kawasaki the money to pull this movie off, I thank them. 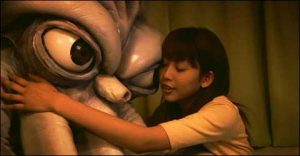 The Calamari Wrestler is a beautiful abnormality that will keep you invested and simultaneously laughing your ass off to the point of tears all the way through. Unlike so many other so-bad-they’re-good movies, you need not expend any effort on trying to pay attention to the story. Just sit back and prepared to be entertained by what I can only describe as the love child between WWE: Raw, Rocky IV, and Days of Our Lives. Mr. Kawasaki, I salute you.