Bootlegless – Asian Bootleg DVD’s (The curse of the copywriter)

Reddit supremo and longtime BMBR contributing writer Darthslug brings us a look at that ubiquitous and mysterious phenominon that is the Asian bootleg, and how not one ounce of sense they make.

I have in my possession a whole shit-ton of cheap foreign knock-offs that do their best at convincing everyone that they could actually be legitimate DVD releases, even though they clearly aren’t. But don’t ask me where the hell they are from because by their very nature that would be almost impossible to say for sure in many cases, so instead we’ll just go with the generic Asia-land. Fine with you? Good, because they very often are complete gibberish no matter where they are from. Some examples… 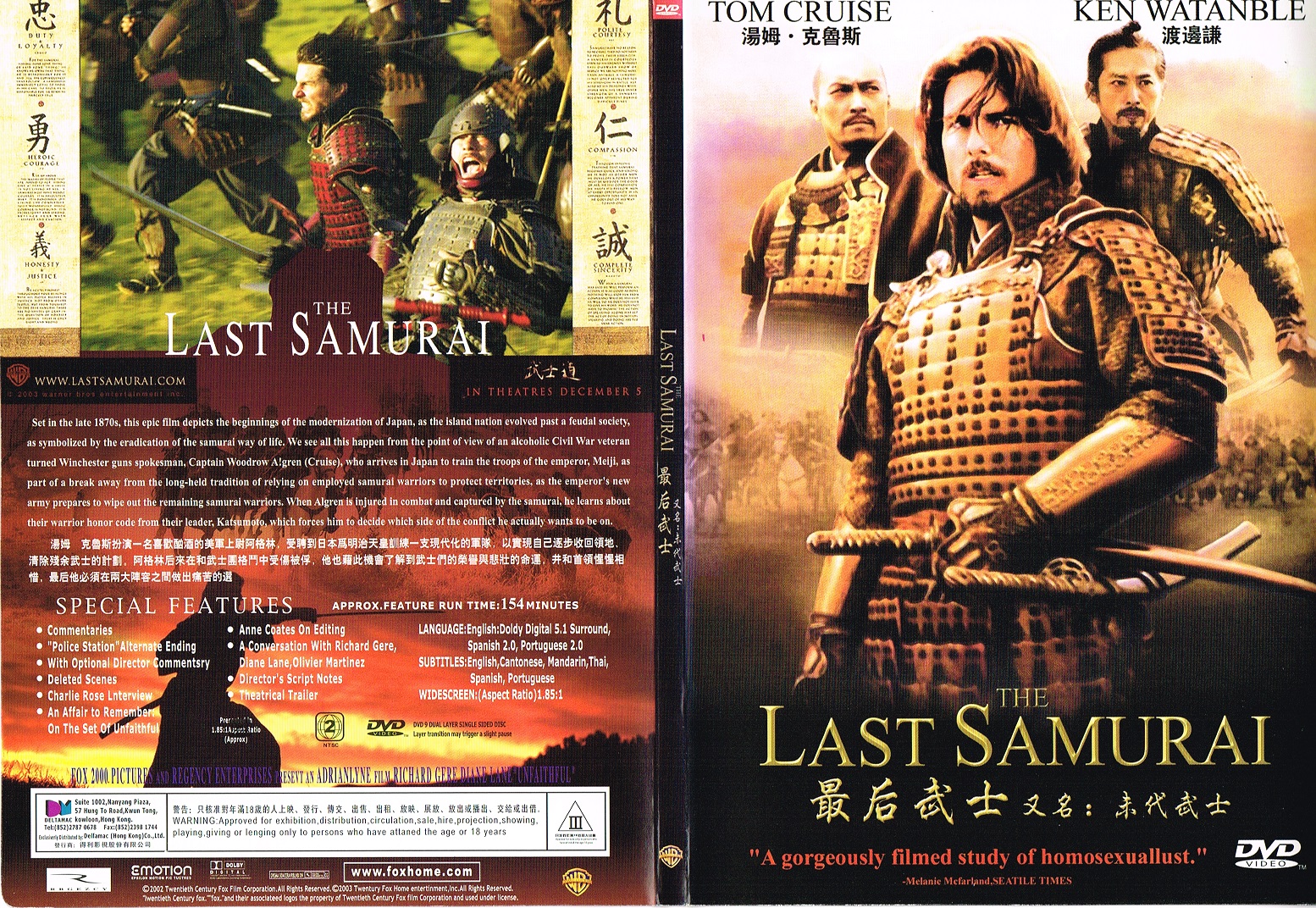 Let’s start with one of my favorites: The Last Samurai. The cover mentions the name of one its actors Ken Watanble, whose real name (when spelt correctly) is of course Ken Watanabe. It’s not a great start but it could be forgiven if it wasn’t for the quote…

“A gorgeously filmed study of homosexuallust”

…apparently written by Melanie McFarland for the Seattle Times. A Melanie McFarland does seem to have worked for the Seattle Times, but I couldn’t find any reviews of hers for The Last Samurai, or even anything that mentions homosexuallust (?) within the movie. The only mention of that quote I could find is the back of the DVD for the movie Taboo, which as you may have observed, is not the same film.

So the front of the cover failed pretty hard. What about the back? First it mentions when the movie was in theatres, because as we all know this is important information for someone buying the DVD. The description of the plot is cogent enough, though it clearly sounds more like something stolen from IMDB. A quick google search tells me I am wrong however. It’s actually stolen from Yahoo Movies.

So on to the Special Features which includes a ‘Police Station’ Alternate Ending, and An Affair to Remember: On the Set of Unfaithful. I think we may have gotten confused as to what film we are from again, Mr DVD cover copywriter. Or possibly we’re not paying attention at all as the DVD also apparently contains a ‘Commentsry’ and an ‘Lnterview’. The language is also mentioned as being in ‘Doldy’ Digital 5.1 Surround, though I’m not entirely sure how that is supposed to sound. That might be a small detail though considering that after watching The Last Samurai you will be made to listen to an interview with Richard Gere and Diane Lane. 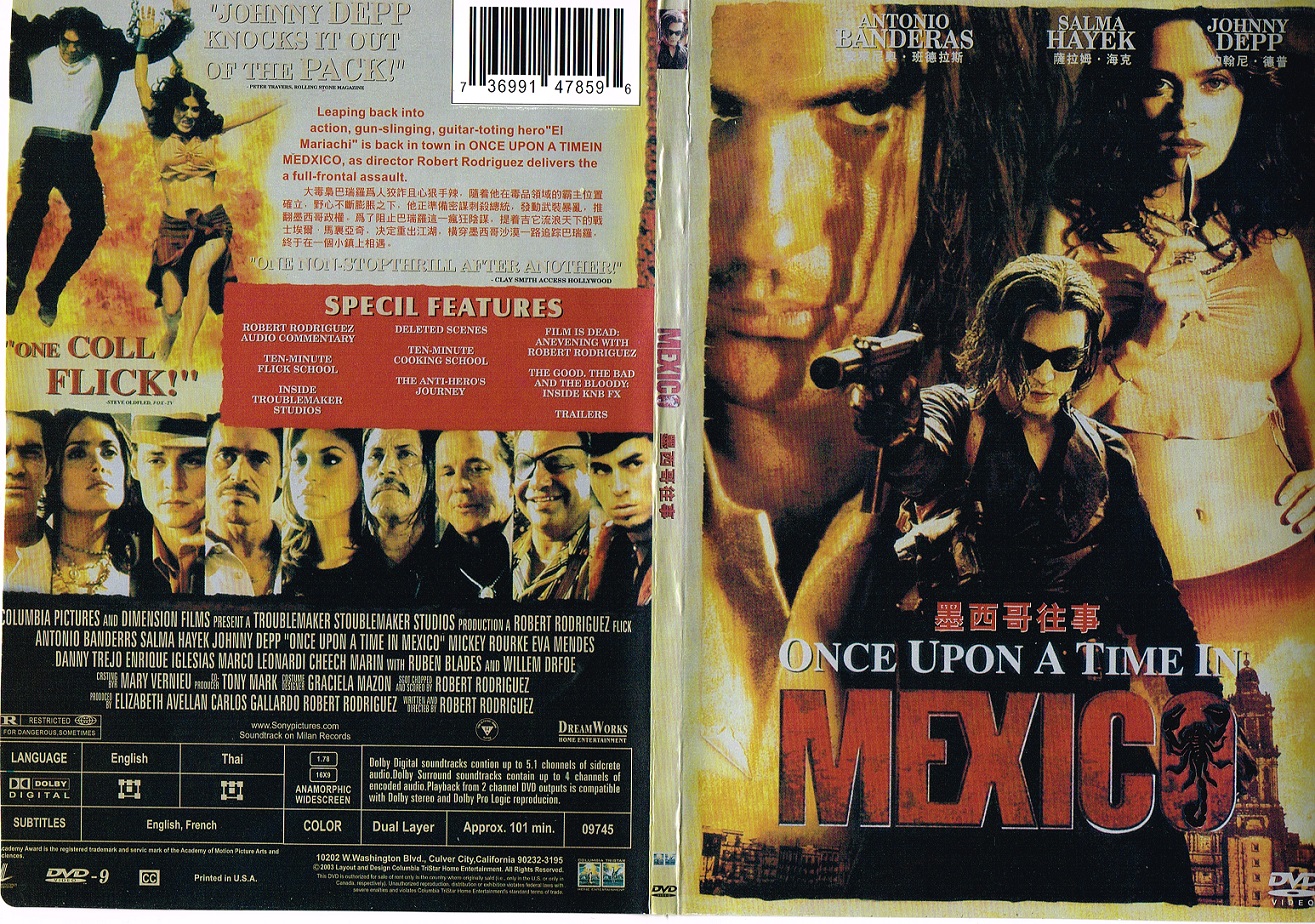 The cover here is actually pretty good – the title is correct and even the names of the actors are spelt correctly. Well done! However, the reverse begins with a quote from Rolling Stone Magazine.

“Johnny Depp knocks it out of the Pack!”

A quick Googling will find the correct quote, but it’s predictably different as it should correctly state…

“You don’t want to miss Depp in this movie – he knocks it out of the park.”

It’s certainly incorrect copy but things progressively get worse with a ‘description’ of the movie. It tells us that El Mariachi is back in town in ‘Once Upon A Timein Medxico’ and then promises the director will give us a ‘full-frontal assault’. Lovely.

Next we have the ‘Specil Features’. Can’t wait. Also, the lower half mentions the actor Willem Drfoe and a Thai language track, even though the DVD only has English. The sound this time is using 5.1 chonnels of sidcrete audio, which must make Doldy feel inadequate. 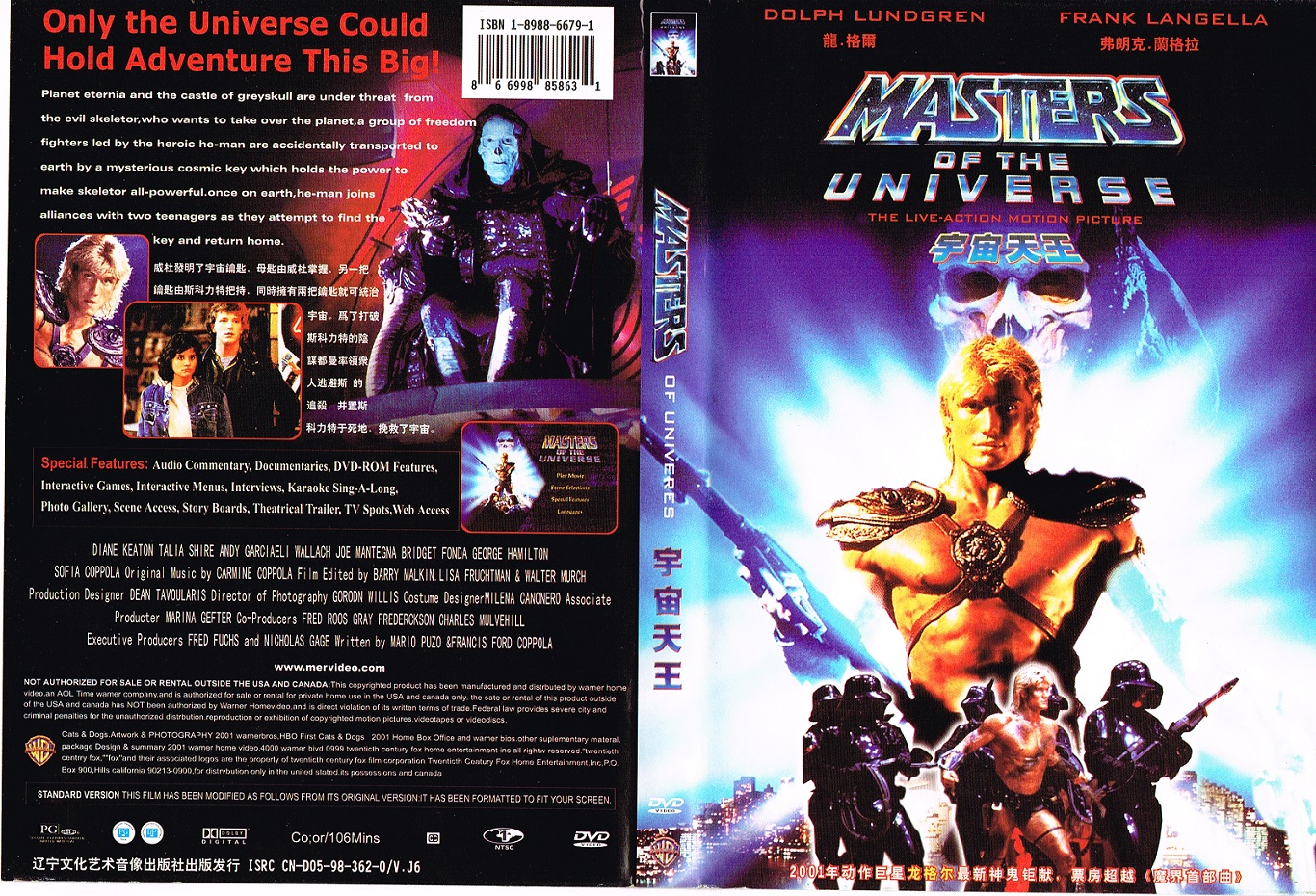 At first glance, the cover for Masters of the Universe looks pretty good and there actually isn’t much worth whining about, at least on the front of the dvd. It’s slightly worse than the original cover, since you can’t even see He-Man’s sword and the earthlings are replaced by He-Man and Skeletor’s stormtrooper army, but besides that there aren’t many differences. Looking at the back, the text is reasonable enough, despite the odd grammatical hiccup.

Next are the special features. You have all the normal stuff like an Audio Commentary, Documentaries and Interactive Menus, followed by less normal stuff like Interactive Games, a Karaoke Sing-A-Long (?) and Web Access. None of these are on the dvd, which is sad, since I would totally like to sing the old He-Man theme with Dolph Lundgren. Or play a shitty DVD game. Again, with Dolph Lundgren.

Then we have the credits, and boy oh boy are they interesting. Did you know that Diane Keaton, Andy Garcia and Sofia Coppola are in Masters of the Universe? Or that it was written by Mario Puzo and Francis Ford Coppola? Neither did I, though I’m pretty sure that those credits belong to The Godfather Part 3, but of course I could be wrong. This is followed by some text about the movie Cats & Dogs, which is the typical “Our text is so small that no one reads it anyway, so we just gonna write shit” stuff, you read on those covers. In the space of a few lines you go from ‘Warner Bros’ to ‘Warner Bios’, from ‘Twentieth Century Fox’ to ‘Twenticth Century Fox’ to ‘Twentieth Centrry Fox’ and even ‘Twentieth Ceatury Fox’. One of them’s bound to be right. 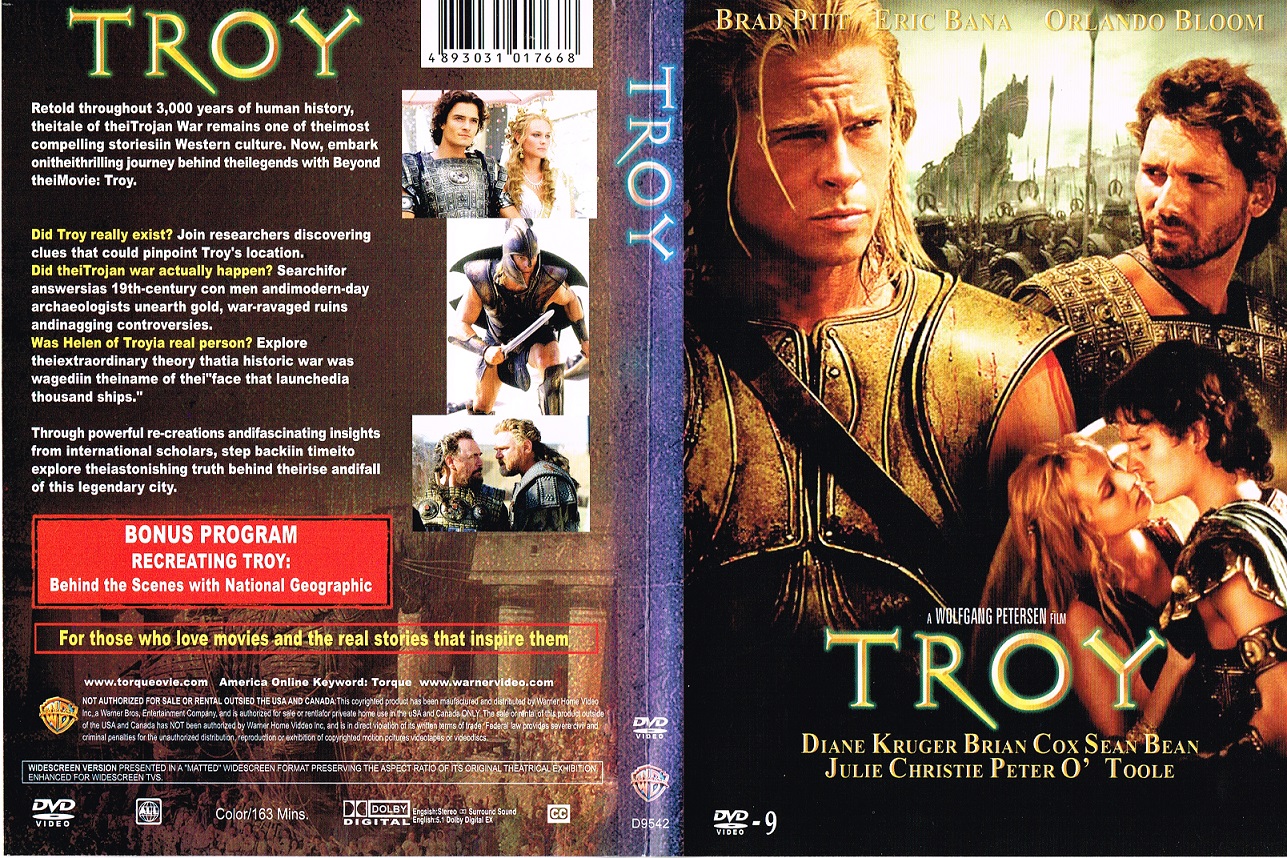 The front? Again, this seems fine, and again, it’s lying. Correct title, right director, all actors are actually in the movie. The only mistake would be that this isn’t a DVD9, because those bootlegs have to be made cheaply. But all in all, a deviously exquisite forgery.

Therefore, all the bullshit has to happen on the back. The biggest problem is that none of the copy is even about the film. At all! It gives you questions like “Did Troy really exist?”, “Did the Trojan war actually happen?” or “Was Helen of Troy a real person?”, all questions that the movie won’t even answer, since it cares more about being an actual movie. But then it doesn’t even answers the questions, instead saying that the DVD will. Let’s break this down.

1)  “Did Troy really exist? Join researchers discovering clues that could pinpoint Troy’s location.” Obviously none of this is part of the movie. There are no researchers and you definitely aren’t given the location of Troy during the film.

2) “Did the Trojan war actually happen? Search for answers as 19th-century con men and modern-day archaeologists unearth gold, war-ravaged ruins and nagging controversies.” What the fuck are they on about? Again, there is no archaeology stuff in the film. Brad Pitt is NOT an archaeologist. We don’t unearth gold, we don’t look at ruins, and we clearly also don’t examine Troy-related controversies.

3) “Was Helen of Troy a real person? Explore the extraordinary theory, that a historic war was waged in the name of the ‘face that launched a thousand ships’.” Sigh. THIS IS NOT IN THE FILM.

I should point out that I tidied up the grammar as best as I could, because I seriously think that this copywriter was afraid of his space key. Nearly half the time he combined two words by using an “i” instead…

Are there any other interesting things you could find here? Well yes. There is the mentioning of a website called ‘torqueovie’, which obviously doesn’t exist. The correct spelling would be ‘torquemovie.com’, which simply sends you to the Torque section on the Warner Bros website. Yes, that Torque. It’s Fast & The Furious but with bikes and Ice Cube and Dane Cook. And no archaeologists. 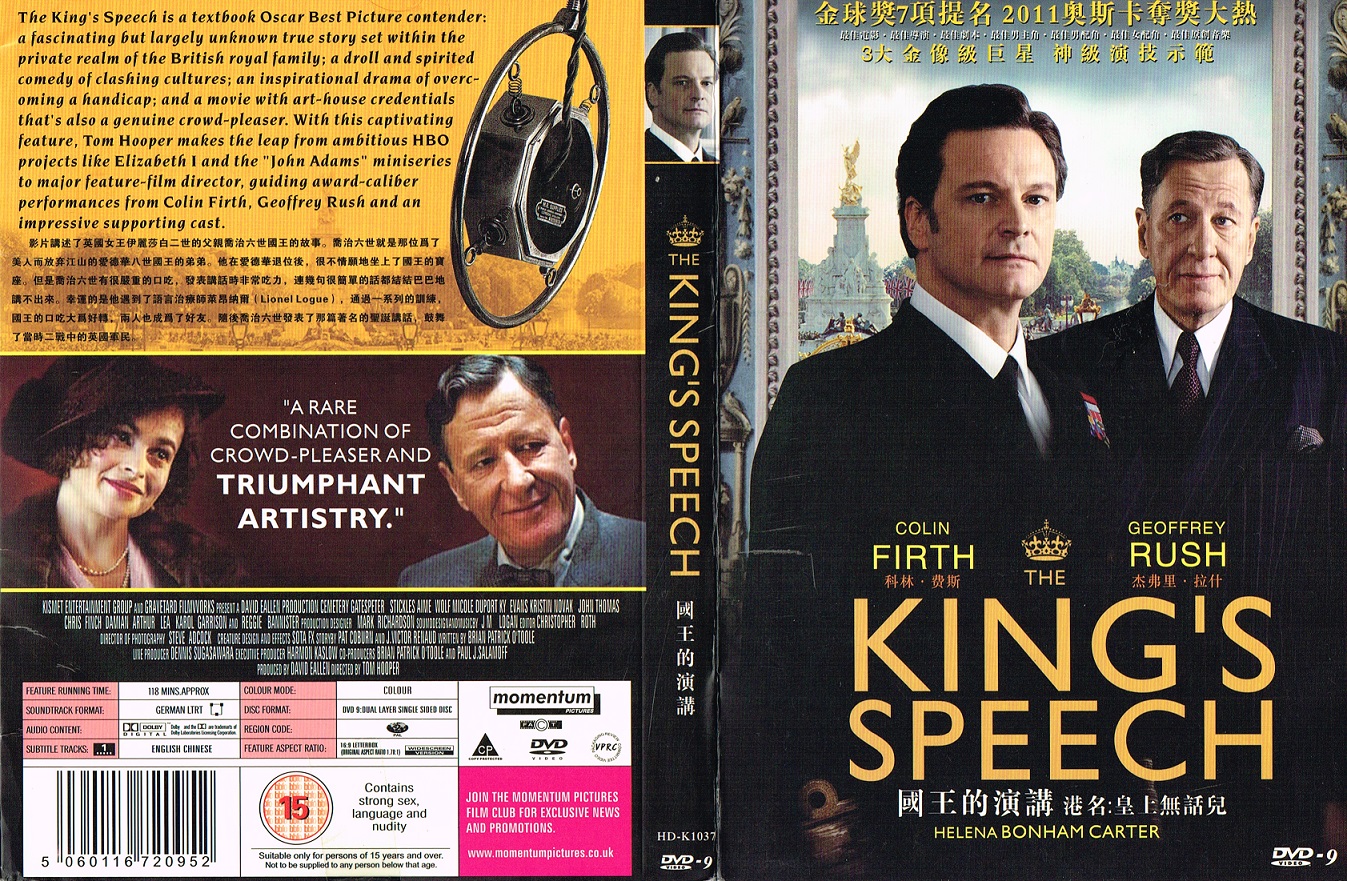 Let’s end things with an example of how to steal from Hollywood correctly. The King’s Speech comes in a beautiful looking slim paperboard box. It looks like something you could actually buy without feeling vaguely criminal and has only some minor problems, like splitting a word (overc-oming), saying that it is in German (it is in English only) and the credits, which reference a horror film called Cemetery Gates.

But even with those few mistakes, this is how to do things properly. So obviously it’s wrong as I’m not just paying a discounted price for a knock-off film. I also DEMAND my gibberish. Pay attention Asia. Get it WRONG.