Bigfoot vs Zombies – A Guest Review

In will only be a matter of time before every combination of monster mash-ups has been attempted at least once. In today’s guest review, EZeggnog proves that there are those who are very hard at work in smashing things together that shouldn’t be.

Well ladies and gentlemen, it’s that time of the year again. The brisk month of October is upon us, meaning that it’s time to break out the Friday the 13th box sets and jack-o-lantern carving kits. Throughout this most glorious month I’ll be writing reviews for some of the most abominable (and sometimes awesome) horror flicks to ever grace the bottom of a Best Buy bargain bin. The first selection, I’m sad to say, is not on par with legends such as Troll 2 or Zaat, but still manages to deliver some hearty chuckles to so-bad-they’re-good movie fans (especially if you’re a tad buzzed). I present to you the 2016, Mark Polonia-directed travesty that is Bigfoot vs. Zombies. 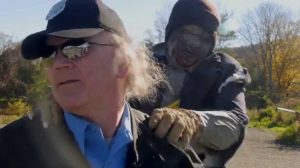 The story centres around several employees of a body farm somewhere in Wyoming (even though all the vehicles have New York plates). Now considering how little the director must’ve given a shit, these employees aren’t exactly the most unique horror movie characters. You’ve got your drunken idiot who’ll obviously get killed, your sexy female lead, your unlikely male protagonist who’s forced to grow a pair when the shit hits the fan, your brilliant scientist who’s hiding some nefarious secret that will significantly impact the story in some way or another, and some bland side characters to use as zombie chow. They even manage to whip up a Burt Gummer wannabe to provide the “pulse-pounding” gunfights with the zombie horde. 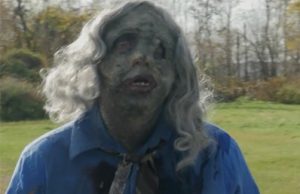 All of these cliches are thrown together at a body farm where surprise, the bodies come back from the dead! Now our complex characters, who we are deeply emotionally invested in (insert all the sarcasm here) are forced to fend off the same ten zombie extras over and over again until their savior arrives: Bigfoot. Why is Bigfoot in this movie, you ask? Why is he helping humans survive the undead? Because of reasons, and the female lead has nice knockers. I mean, why else would a large, savage ape risk his life to protect an attractive lady? Haven’t you ever seen King Kong? (dear Jesus, I’m comparing this shit stain to King Kong). But I digress.

The story and characters may be as barebones as they can get, but the enjoyment is found not in the individuals, but in the cheap-as-all-hell effects and the absurd action scenes. Seeing a man in a gorilla suit weakly push zombies backwards over and over again is truly a sight to behold. Maybe Bigfoot should claw at the zombies? Or perhaps he should use his inhuman strength to toss the undead horde around like ragdolls? Nope, says the budget, just have him constantly shove zombies backwards with the strength of a dehydrated sixth grader. 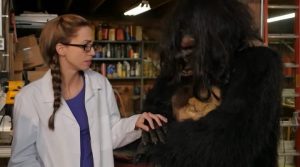 I would be remiss to not mention the hilarious ‘special’ effects that look like something shat out of Windows Movie Maker ‘99. All the blood spurts and explosions are thrown so haphazardly across the screen that it’d make the editor of The Amazing Bulk weep in pain. The zombie costumes look like rejects from a Party America commercial, with most of them lacking any makeup to cover their faces and bare arms. It’s not just the zombies that suffer in terms of costuming. Bigfoot’s body suit is a typical gorilla costume with patches of bare skin (which resemble lipomas more than actual skin tissue) glued aimlessly across the furry giant’s torso.

Even the human character’s apparel looks like something fished out of a high school drama club’s trash can. One particular character that we’ll name “Middle-aged Rambo”, pictured above, is hired to hunt down Bigfoot. What expert hunting equipment and weaponry does he use? Why, a sleeveless camo t-shirt and pellet gun of course! Oh, and don’t forget the tacky bandana tied around his forehead to keep the Bret Michaels wig on.

Nothing about this movie is particularly interesting or memorable. The zombies are created by the cliche “mad scientist tried making Science Formula X but it backfired on him, leading to terrible results.” The characters are as charismatic and emotional as a bowl of tapioca. The zombie and Bigfoot costumes look like they were applied by a bunch of 11 year olds with cataracts. The special effects suck, the script sucks, the set sucks, everything just fucking sucks. 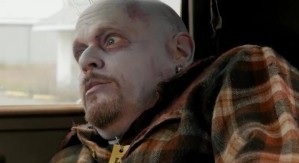 The worst thing about it is how goddamn unremarkable it is. And in the world of terribly-hilarious filmmaking, that’s the worst sin you can commit. I want the 90 minutes of my life I spent watching this travesty back and I demand that Mark Polonia is forcibly prevented from ever laying his talentless hands on a film camera again.