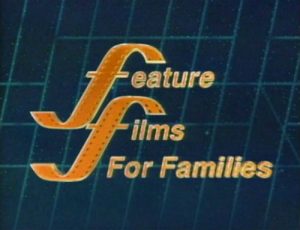 Feature Films For Families (FFFF) make movies with an agenda. Well, more than one agenda, if we are to address the elephant in the room here (hint: the elephant is money).

Their work takes the shape of movies that are supposed to offer an alternative to modern, super-evil, cinema. But instead, they are feel-good piles of moralising, pseudo-religious, behavioural correction, created by a bunch of thieving crooks and pan-handlers. They appear to have a thing or two for telling you how to behave, right after begging for your change. They excel at only one of these activities. In the menus of presumably all Feature Films For Families DVDs appears a TON of additional material in the form of videos, trailers, things to read, and of course, things to purchase. There is also a man who says the following…

“We produce and distribute uplifting and entertaining motion pictures that are suitable for all ages, and strengthen positive values while containing no profanity, vulgarity, sexual content, or graphic violence.”

So there’s no guns or ass?

Rigoletto is a film version of the classic Giuseppe Verdi opera that I know absolutely nothing about. That said, I am very sure that certain things were lost in its translation to film, such as not being a cringe-worthy load of old wank.

As Rigoletto began I let out a scream, mostly because I was afraid of being bullied by a musical in to appreciating spontaneous chorus lines. Not that I have a thing against musicals, but any film that has on its cover a (no shit) list of questions to discuss with your children once the movie is finished, will have me on the back foot. So combine that with the threat of song at any moment and yeh, I’m on edge.

As the story begins, there’s lots of “Once upon a time” crap and fable nonsense, but no singing (yet) which I am grateful for. A car from the twenties appears, as well as a man in modern clothing, so I assume things are set in a non-committal ‘the past’.

I’m immediately agitated by the quality of the visuals, as they are honestly exceptional. The people who actually made the flesh and bones of this movie were highly skilled in the art, and no I’m not kidding. Everything from sound design to editing is legitimately excellent, which forces from me some unwelcome respect, and yet more soul-searching for what exactly I am doing watching this at 3 AM. We are introduced to a little girl, who wants to win big at the singing competition. Good for her. The first song of the movie decides now is the right time to lower my mood, but it would seem I bought a defective DVD and the movie skipped a few minutes.

Unfortunately, the little girl loses big at the singing competition, which she takes sorely.

As the scene changes, the following line was written by someone who needs two weeks until payday’s worth of ramen noodles poured down their throats.

“Being poor makes people do things they shouldn’t do.”

Well, as a relatively comfortable, emotionally entitled, first-world poor person, and on behalf of those who are way worse off than me, I would like to tell that scriptwriter to go and absolutely fuck themselves. And I should also point out to Ms Rand there that being just one rung above abject poverty allows for people to…donate…to Features Films For Families (more on that later), so eat your own fucking logic once you’re done with those noodles, you dick.

Already, the ever-so enlightened, and very gentle looking down the nose-iness of Rigoletto was beginning to make an enemy of me, and Dr Condescension up there did not help matters with his class warfare and sneering attitude towards the financially underwhelmed. So it would be safe to say, at this point anyway (which was five minutes in to the film), that Rigoletto was having not quite the intended effect.

As things continue we see some children taunting a pig, which doesn’t go down well with the pigs husband.

And yes, everything is dungarees and doilies (the past).

The bucktooth pig-fancier, who lives in a literal shed, almost vomits in to a scarf when he finds out a small black child ate his favourite pig for Christmas. During my confusion, I realise it’s 20 minutes in and I have yet to feel good about myself, or be behaviourally corrected.

The mother of the girl from earlier, who has just been evicted from her house, visits her landlord, and has it explicitly implied by the landlord’s butler that if she walks past a certain carpet she will be killed. She finds herself in the company of a disfigured, Tommy Wiseau vampire…

…who then tries to solicit sex from her under-age daughter, in exchange for her not becoming homeless.

The mother says no, but because she won’t be told what she can and can’t do with her body, the daughter decides to go anyway. The girl arrives at the landlord’s house, and swelling Disney-like music accompanies the first throws of child slavery. This scene plays in slow-motion to emphasise how stupid it is, just in case it was being too vague.

Plenty of “Ahhhhh!” choir music plays, as the little girl looks with wonder upon her new home (creepy prison).

But before I can confirm that Tommy Wiseau’s intentions are indeed disgusting, the DVD skips a massively inconvenient chunk of the movie.

What I do catch though is the little girl eavesdropping on Tommy and a singer who is singing and…It skips again.

I now learn that Tommy Wiseau is a singing teacher, and I get to see something to do with friendship, and also some drama (girl falls down a waterfall), before girl goes on to win the state singing finals. Hooray! Except Tommy Wiseau is beaten to death by the townspeople, and I realise that if I hadn’t have…bought a defective DVD, I would probably be crying. No I’m actually serious, Tommy Wiseau really was beaten to death by a gang of otherwise polite and courtly towns-folk, and even though I missed most of the movie due to pressing fast-forward, this was actually a very emotional way to round off a movie about a disfigured freak and his twelve-year-old girlfriend.

But what about the Parents Guide for Family Discussion? 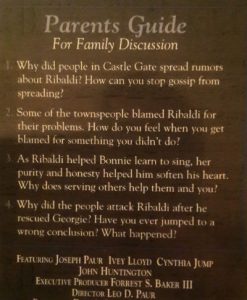 I think it would be very disingenuous of me to take the time to skim through the movie and not play along with the stupid parents guide business. So these are my answers to it’s thoughtful questions. 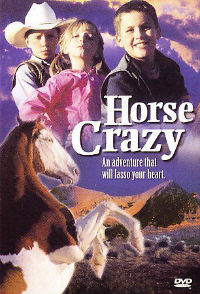 …who then elopes with him and his sister, to find horses.

Meanwhile, two bad-guy horse rustlers decide to rustle a horse. I imagine that the reason they are willing to waste their time on something so painfully retarded is because the economy in modern day America is clearly fucked, and this thrilling heist has more chance of a payout than social security benefit fraud.

Despite the horse rustlers evident learning disorders, they successfully make off with a horse. However, our intrepid school children end up embroiled in all things shenanigan, with all the usual running, chasing, hiding, kidnapping, rescuing, and horses.

However, the details of how and why these hijinks take place are a little vague, as my DVD kept…you get the picture.

So, some very gentle drama happens, as does mild chasing sequences. Eventually, the kids outwit the bad guys, but not before some even milder to-ing and fro-ing, and of course, the laying of booby-traps. They predictably win the day and ride off in to the sunset, and I learn that horse rustling is bad, and being good is good.

But what about the Parents Guide for Family Discussion? 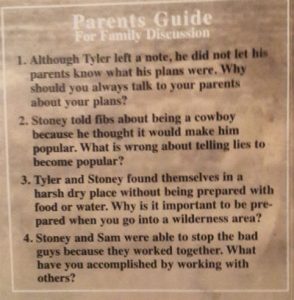 So what is all this crap then?

When realising that I had just added another Feature Film For Families movie to The Collection, I became immediately suspicious of them as a production studio. They just seemed far too clean-cut a bunch of moralists to not have some severe and abundant skeletons in their closets, or torsos under the patio. Were my suspicions correct? Well, as I have already kind of spoiled by calling them swindlers, FFFF have a bit of a reputation.

Or as someone on the interwebs referred to the practice…Telemormonism, which is amazing.

So, according to the always accurate Wikipedia the Fuhrer of Feature Films For Families, a certain Forrest S Baker III, pictured here…

…has been a bit of a naughty boy it would seem, and has employed some, shall we say, mildly immoral tactics when promoting and funding his films.

Maybe Forrest S. Baker III should produce a movie about a bunch of adventurous school-kids, and how they all foil the evil schemes of an unscrupulous film studio, prone to run-in’s with the Federal Trade Commission and the massive fines then imposed, and then watch that film repeatedly until the sheer level of irony materialises into a gollum that force-feeds him his own words.

Yes, that’s right, FFFF have been up to no good and, through many lawsuits and prosecutions were revealed to have marketed their films in ways that aren’t entirely kosher, namely cold-calling people on an industrial scale and essentially attempting to swindle money out of anyone that would answer their phone.

Also, his hair looks like it’s magnetic, or attached by a Lego stud. He also uses the word..

…and he has that general demeanour and vocal creepiness that convince me he is imagining his auto-cue is wearing crotchless panties, or that the camera-woman is a horse.

Yes, he spent far too much of his time haranguing pensioners and sifting money from their confused brains, but lets get real here. We’ve all definitely heard of far more underhanded methods that producers have employed to fund their films, right? So maybe we should cut him some slack. Okay, maybe not. But things could be worse.

He did at one point mention “The Great Teacher” during his funding pitch in the special features, which is code for Jesus or God, or both, but I am happy to reveal that his obvious bible-love does not feature in his films. Which is good for him, because it would otherwise have just added more heavy objects in to his inflatable arm-bands, and he would have sunk even further in to the swamp of hypocrisy he lives in. This only further convinces me that despite his dodgy promotional methods, and probably untrue rumours that I unfairly pounced upon for this review, he honestly wants to provide the service he claims to want to provide. Namely, making films that aren’t full of sordid muck, and are instead, beacons of wholesomeness.

And after watching (some of) two of his films, I honestly can’t help but be slightly won over by his movies. They really are all good, clean, well made, safe films, and would work just fine as movies a whole family could use to morally correct each other.

Except, instead of referring to what he makes as ‘movies’, he calls them ‘stories on film’, which is so fucking stupid that it reminds me that if the day should ever come when he pulls his head out of his ass, he might just realise he’d be better placed producing snuff movies for the Catholic Church.

At least there’ll be plenty of funding.